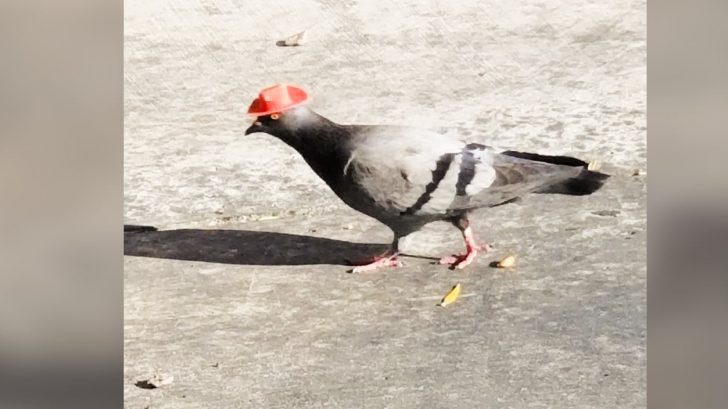 On December 5, Las Vegas resident Bobby Lee couldn’t believe his eyes when he encountered a group of pigeons in a parking lot.

Some of the pigeons were wearing bird-sized cowboy hats while pecking at the ground. “Just another day in the neighborhood,” Lee captioned the video.

According to The New York Post, these particular pigeons were spotted near Tropicana Avenue and Maryland Parkway.

Just another day in the neighborhoodTo use this video in a commercial player or in broadcasts, please email licensing@storyful.com

Soon, other people began noticing the hat-wearing pigeons around Las Vegas. Like Lee, these people began sharing videos and photos whenever they encountered the birds.

“Howdy partner,” Kassandra Flores wrote over a video she took of a cowboy hat-wearing pigeon she discovered while driving down the road.

Someone has been placing tiny cowboy hats on pigeons around Las Vegas.
The reason? Your guess is as good as ours. ?‍♀️

But while some residents have been amused by the sight of the pigeons, one animal rescue group has expressed concern about their well-being.

“At first, I was like, oh my God that’s cute!” said Mariah Hillman, who runs the organization. “Then, I was like, wait a minute – how did they get those hats on there?“

That’s when Hillman grew concerned, “Did they glue [the hats]? And what does that mean for [the pigeons]?” she said. “Is it something that’s going to impede their flight or attract predators?”

NATIONAL NEWS: Someone is putting tiny cowboy hats on pigeons in Las Vegas as animal rescue works to remove them https://t.co/JoqSLJzIqG pic.twitter.com/TRbaqYbMgE

Lofty Hopes, which refers to itself as “a pigeon positive movement,” has now sprung into action. They are working to locate the pigeons so the hats can be safely removed:

“We drove up and down here yesterday for a good two hours just handing out business cards to any location where I saw pigeons and people,” Hillman told KVVU. “If you see these birds, just feed them until I get here. I’m only 3 miles away and I’ll come trap them.”

It remains unknown who put the hats on the pigeons, and why.

You can learn more about the hat-wearing pigeons of Las Vegas by tuning in to the video below.