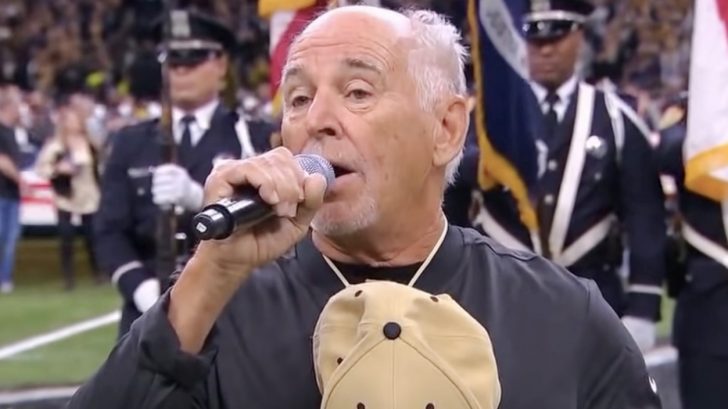 Even if you aren’t a football fan, chances are you will watch at least part of the Super Bowl whether it be the commercials, the halftime performance, the game, or the National Anthem performance. Well, the games deciding which teams will vie for the coveted Vince Lombardi Trophy took place over the weekend, and boy were they nail-biters.

Both games were forced into overtime in the last seconds of regular time and one even had a very controversial play, but even so, people can’t stop talking something that happened before either game even started!

In the days leading up to the NFC Championship game between the New Orleans Saints and the Los Angeles Rams, Jimmy Buffett began teasing his upcoming performance of “The Star-Spangled Banner” for his beloved Who Dat Nation.

Sunday Funday! Who dat!!
We are excited to share that Jimmy will be singing the National Anthem before the Saints / Rams game on FOX this Sunday afternoon. Check your local listings. @Saints pic.twitter.com/YNGlvMOknO

A huge Saints fan himself, Buffett couldn’t wait to perform in the Mercedes-Benz Superdome.

good morning from New Orleans! otw to the Dome for rehearsal. who dat!

When the time came for Buffett to stand at the 50-yard line and belt our nation’s anthem in front of the 74,000+ people in the stands plus millions watching from home, the “Margaritaville” singer took off his Saints ball cap and placed it over his heart.

We’re not even sure he made it through the entire song before people started tweeting about his performance.

Wow. One of the worst renditions of all time. Awful

Jimmy Buffet officially in the Fergie category of national anthems

Great job by Jimmy Buffet reciting the National Anthem there

What an inspirational National Anthem from Jimmy Buffett… his message is clear:

"Anyone… literally anyone… can sing the Star Spangled Banner as long as you know the words."

What didn’t help his cause was when he did a mic-drop as he walked off the field.

Any truth to the rumor you’re teaming up with Rosanne for a duet at the Super Bowl?

Jimmy Buffett sounded like a random dude from the stands. Then did a mic drop.

@jimmybuffett singing our national anthem and doing a #MicDrop at the NFC championship game…
… reminds me that our country isn't completely broken. God bless you, sir!

Some fans even blamed him for the Saints’ loss!

@jimmybuffett the saints got a terrible call after your hateful hack job … you might’ve just spat all over the field. MAGA!

The reactions weren’t all bad though, a lot of his fans, who are called Parrot Heads, had his back!

Shoutout to Jimmy Buffett who knows how to keep an anthem short and sweet.

After a great National Anthem….nothing left for Jimmy Buffett to do but drop the mike and walk off. 🦜🍹 🏈 pic.twitter.com/6rAkKKR8wG

Watch Buffett’s National Anthem performance below and let us know what you think of it.