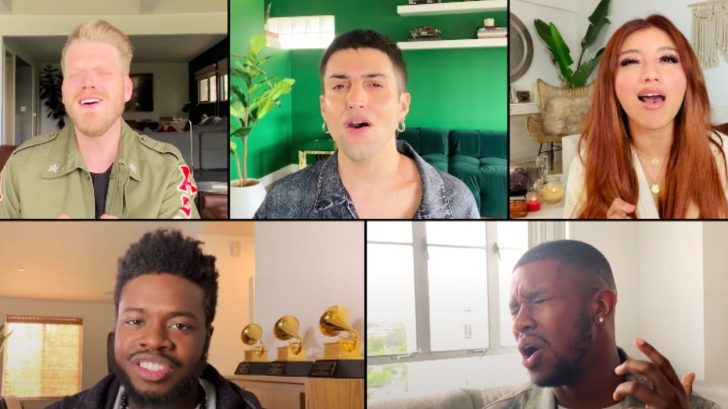 After spending many months at home, the members of Pentatonix felt inspired to create a project reflecting this time in their lives. The resulting project was a six-song EP titled Pentatonix At Home.

The record contains the a cappella group’s renditions of popular tracks such as “Dreams” by The Cranberries and “When the Party’s Over” by Billie Eilish.

To celebrate the release of their new EP, Pentatonix also shared a new music video. The video is for the first track on the album, which is a medley performance titled “Home.” The song is a mashup of many tunes about being at home, loving your home, and wanting to go home.

One of the songs Pentatonix included in the mashup was “Home” by Michael Bublé. He co-wrote the song, and was the first artist to record it.

“Home” later earned a country connection when Blake Shelton released a cover in 2008. His version was a number one hit on the Hot Country Songs chart and reached the 41st position on the all-genre Billboard Hot 100.

Shelton and Bublé got together to re-record the song with a Christmas twist, and that rendition was released in 2012. It was also a success, and peaked at the 36th spot on the Hot Country Songs chart.

A 2013 live recording of the song, featuring Usher, also reached the 36th spot on the Hot Country Songs chart.

Another country song featured in Pentatonix’s “Home” mashup is “House Party” by Sam Hunt. The song was released in 2015 and topped both the Hot Country Songs chart and the Country Airplay chart.

Can you identify any of the other tracks featured in the clip?