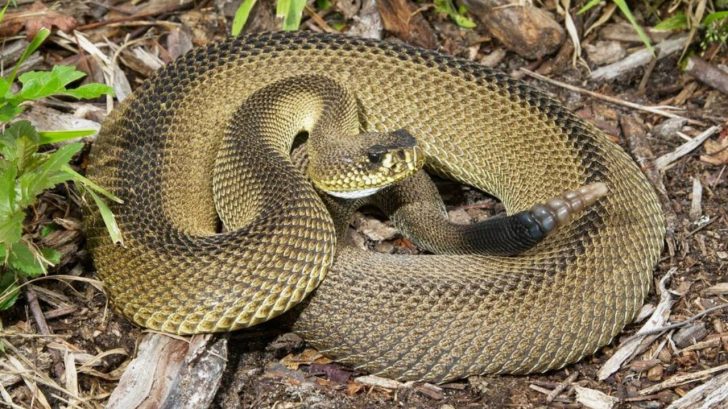 Diamondback rattlesnakes are typically easy to identify, as the diamonds surrounded by a light tan outline formed by their scales create a distinctive pattern on their otherwise brown backs.

When threatened, the rattlesnake holds itsself vertically to appear bigger and rattles its rattle to alert predators of its location and not to mess with it. Rattlesnakes tend to want to avoid conflict unless absolutely necessary. This is how they react to their environment.

Patterns are one of the easiest ways to identify snakes, and this patternless rattlesnake can confuse even the most experienced outdoorsman.

Biologist Pierson Hill found what is being described as a “patternless” rattlesnake in North Florida. In a social media post, he said, “This color morph is exceptionally rare – only a small handful of patternless diamondbacks have been documented by biologists.”

Hill explained that in order for a diamondback rattlesnake to exist without the telltale diamonds typically seen within its species, both of its parents would have to carry the recessive genes for patternless scales.

While diamondback rattlesnakes tend not to be aggressive and will leave you alone if you don’t bother them, it’s important to keep your distance if you see one in the wild, unless you’re an expert. After catching and microchipping the snake, Hill safely released the patternless phenomenon back into the wild.