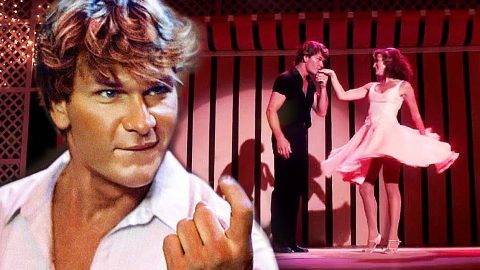 Even before he starred in 1987’s Dirty Dancing, Patrick Swayze was well on his way to becoming a Hollywood heartthrob with his past films The Outsiders, Red Dawn and Youngblood.

But after he starred as Johnny Castle and danced his way into America’s hearts in Dirty Dancing, he was a full-on sex symbol.

While the whole movie has become somewhat of a classic, it’s mostly in part to the iconic final dance number with the incredible and legendary lift.

Fancy a fizzy night on the tiles with yours truly?! ? Then come and support @TheOperaAwards & bid in their charity auction… I’m the best date as I’ll always drink more than you & I can deliver the Dirty Dancing lift on almost anybody. https://t.co/U0ZNSAcx9g pic.twitter.com/B2hgx0CqD9

Swayze and Jennifer Grey’s chemistry during the entire movie and especially the final dance will give you chills. The lift has been recreated many times, but none have been executed quite like Swayze and Grey’s.

Fun Fact: Jennifer Grey was too scared to practice the lift and her first attempt was on film. “The day you see me do it in the movie is the first time I do it,” she once told Self Magazine.

Their Mambo to “(I’ve Had) The Time Of My Life” is the perfect ending to the romance drama and in our minds, Johnny and “Baby” dance together for the rest of their lives.

Since Swayze’s death in 2009, his legacy is able to live on through the film’s final performance.

Watch the incredible dance below.