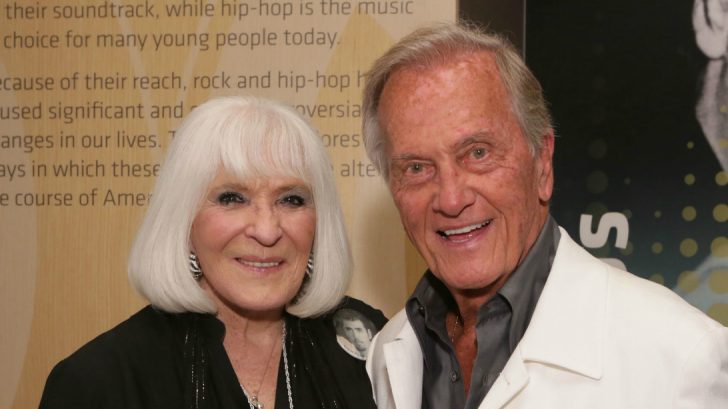 Shirley Boone, wife of legendary entertainer Pat Boone and daughter of country legend Red Foley, has died at the age of 84. Boone died Friday (January 11) at their Beverly Hills home after suffering complications from vasculitis, which she had contracted less than a year ago. In her final hours, she was surrounded by her husband and their four daughters, Cherry, Lindy, Debby and Laury, according to a statement released by Pat Boone’s manager.

We lost a wonderful soul a short time ago. As some of you know, Pat Boone has been a long time client…and more than…

Shirley was married to Pat Boone for 65 years and had established herself as a philanthropist, television host and author. The couple started dating when they were 16 and eloped when they were just 19 years old. Boone recalled the tearful moment he asked Shirley’s father for permission to marry her.

“He tearfully asked me one thing, ‘Will you take care of my girl?’ and I said I would,” Pat said. “And the tears rolled into his coffee because he knew he was moving and planned to take her with him, but he was willing to leave her with me.”

Shirley was the daughter of Country Music Hall of Famer Red Foley who boasted one of the first ever million-selling gospel records with his 1951 single “Peace In The Valley.”

Following Shirley’s death, Pat Boone told PEOPLE that he was certain he would be seeing his high school sweetheart again.

“We lived a wonderful, blessed life together for 65 years. I’ve parted with my better half for a little while… but we don’t die, we just move on to another place, and today was moving day. She’s changed her address is all and moved to a different mansion that I expect to join her in one day,” Boone, a devout Christian, said. “I’m very confident of that. That took the sting out of what happened today because we know we’re gonna be together again and have a whole new beginning.”

Our thoughts and prayers are with the Boone family.