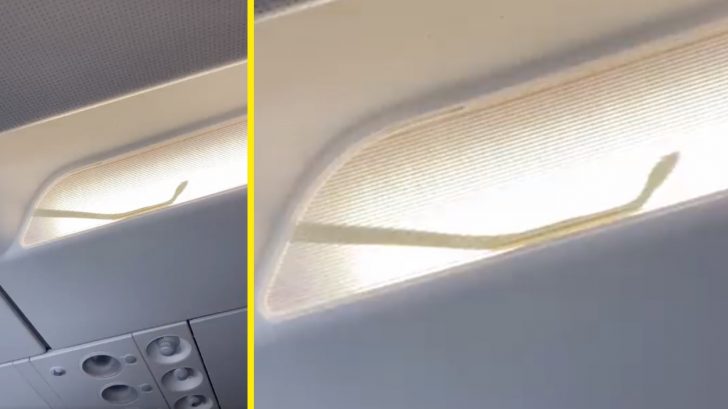 According to a video recently shared to Twitter last week, travelers on an AirAsia passenger jet plane were forced to land and deplane after a snake was spotted slithering through the overhead lights.

The plane was said to have come from the city of Kuala Lumpur and was on its way to the city of Tawau when the snake was found. Video footage taken from a passenger on the flight shows the snake’s silhouette in the light fixture as it made its way through the cabin.

Once the captain of the airliner found out that there was a snake on the plane, he took “appropriate action” and diverted the plane to land in the city of Kuching—900 kilometers (560 miles) west of Tawau.

Authorities said that everyone deplaned the aircraft and boarded another flight to continue their journey while the plane with the snake on it was fumigated to get rid of the reptile, and any other creepy crawlers that might have snuck their way onboard.

“At no time was the safety of guests or crew at any risk,” AirAsia chief safety officer Liong Tien Ling said in a statement, according to GMA Network.

Many people in the comments of the Twitter post joked how the incident was all-too-familiar to the 2006 action movie Snakes On A Plane.

“Snakes on a plane is real!!” one user commented.

Another said, “One of my worst nightmares. Too scary for me.”

Watch Footage Of The Snake Below

An AirAsia flight from Kuala Lumpur to Tawau was forced to change course after a snake was seen on board.

To avert any untoward incidents involving passengers and crew, the flight was diverted to Kuching.

Here, the reptile is seen moving very slowly behind a translucent panel. pic.twitter.com/dAhCFAlppE