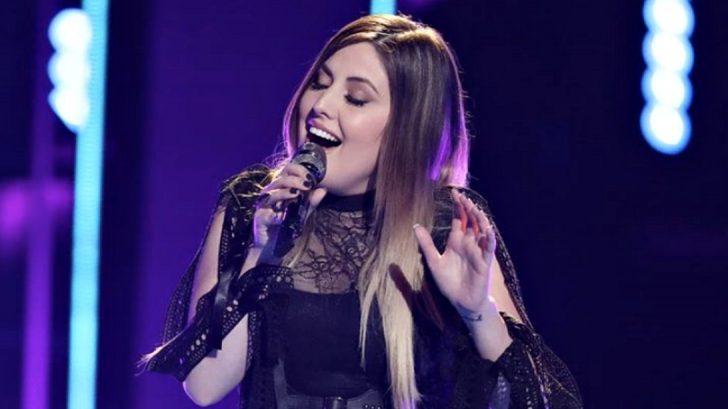 One of the most fascinating contestants to watch on the 16th season of The Voice has been Maelyn Jarmon. The Frisco, Texas, native has dominated the competition despite only having hearing in one ear.

When Jarmon was two-years-old, she had tubes put in her ears in an attempt to help treat infections. The procedure led to damage in both her ears, leaving her with no hearing in her right ear and 80% hearing in her left. Throughout her Voice journey,  Jarmon’s hearing impairment may have felt like a disadvantage to the singer herself. But, for fans watching her perform, her performances have never been anything less than perfect.

We first met Maelyn Jarmon during the Blind Auditions when she earned a rare four-chair turn after her cover of “Fields of Gold.” Within seconds of hearing her sing, coaches Adam Levine, Kelly Clarkson and Blake Shelton turned their chairs. Coach John Legend held out, sitting with his eyes closed as he listened intently. He eventually turned, knowing that his team wouldn’t be complete without Maelyn.

“What you did, it showed your skill. It showed your mastery of your instrument. It also showed that you have magic, too,” Legend told Jarmon. “I don’t want you to be coached by someone who has been here so long that they’re jaded. Sometimes you need a fresh perspective…someone with a new energy.”

Maelyn agreed and became the first member of Team Legend. Together the pair have dominated the competition week after week. From Coldplay to Rihanna to the Beatles, every performance has delivered. But, perhaps no performance this season has moved us like Jarmon’s finale performance Monday night (May 20).

Jarmon, who is one of four finalists left vying for the Voice title, closed out part one of the finale show with a stunning rendition of Leonard Cohen’s “Hallelujah.” The emotion-filled performance was sentimental for the singer who recalls singing the song during karaoke with her father years ago when she was a struggling waitress.

Upon her song’s conclusion, she was overwhelmed by emotion as the audience gave her an extended standing ovation. Was their reaction an indication that Jarmon has sealed her fate as winner of season 16 of The Voice? Quite possibly, but we will have to wait to find out if Maelyn or one of the three members of Team Blake (Gyth Rigdon, Andrew Sevener or Dexter Roberts) will take home the title.

Tune in to NBC Tuesday (May 21) at 9/8 cst to see who will win Season 16 of The Voice. But first, watch Maelyn Jarmon sing “Hallelujah” during part one of the two-part finale in the video below.