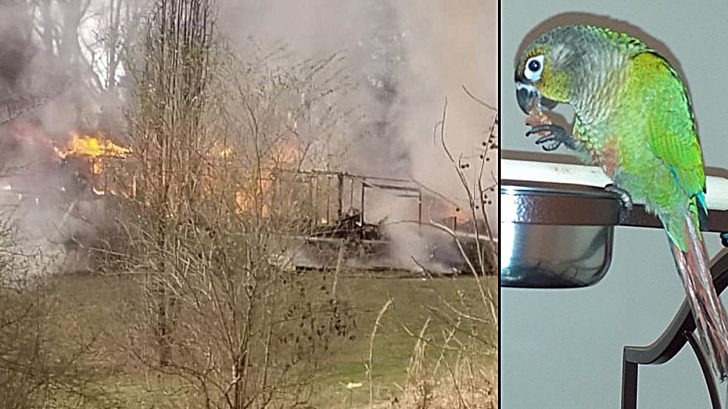 A family from Lebanon, Tennessee woke up in the middle of the night hearing their parrot named, Louie, screaming “FIRE.”

Parrot shouts 'fire' to warn family about blaze in kitchen A family owes their lives to their beloved parrot. https://ift.tt/2HRsatA

Posted by Getlivenews on Sunday, February 23, 2020

“Louie is a true hero,” Barbara Klein, told news agency Southwest News Service (SWNS). “If it weren’t for him I probably would have been sleeping during the fire. He started squawking ‘fire’. He had never said that word before in my recollection. When I woke up, the fire was starting to spread across the living room floor.”

When the fire broke out the grandmother of the family, Barbara Klein, was the first to wake up and hear the bird screaming. Once she realized what was going on she immediately woke up her husband, Larry, and their 6-year-old granddaughter. According to Barbara, they barely escape with their lives.

Barbara’s husband ran back into the house after everyone got outside and made his way to the kitchen in attempts to use water to put out the fire. She said he tried to save Louie the bird, some puppies that were also in the home and his grandfather’s guitar.

However, the blaze became too much for him and he couldn’t breathe and Barbara was screaming at him to leave the house. Smoke was filling almost the entire house and she told him to get down on the floor and crawl out of the house. He almost didn’t make it but Barbara pulled Larry out of the fire. She got him into the car and drove everyone out of the driveway.

Larry suffered burns to his hands, face, and nose. The doctors had to clean out his lungs and he was put into a coma. She says it was a miracle that he survived. Fortunately, Larry made a full recovery and was able to leave the hospital before his granddaughter’s birthday party.

The family is currently looking for a new home and in the meantime, the community chipped in and gave the family clothing to wear and someone actually donated an apartment to them for three months. The guy who let them have the apartment for 3 months also gave them a baby parrot to start their new life with. Barbara and Larry decided to call him Louie, Jr.