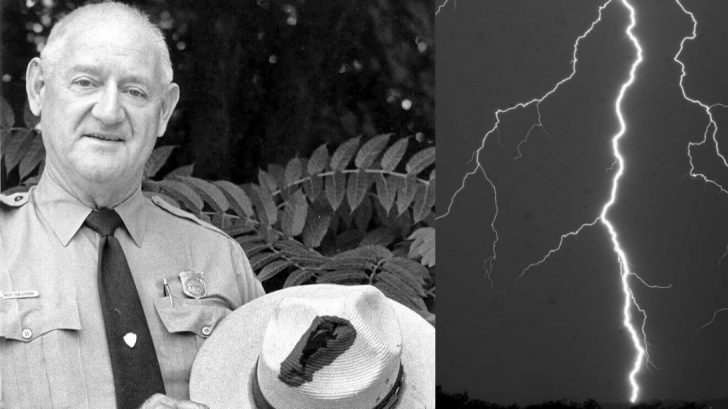 Few people get struck by lightning and live to tell about it. But, one unlucky (or lucky) man earned a distinct place in the Guinness Book of World Records for “Most Lightning Strikes Survived.”

Roy C. Sullivan served as a park ranger at Shenandoah National Park for 36 years, starting in 1940. Over the course of his career, he became the most famous ranger in the park’s history after surviving seven lightning strikes. 5 of the 7 strikes happened in the park, and his stories of the unfortunate incidents have made him a legend among those rangers who have come behind him.

In an interview with the Washington Post, Shenandoah National Park ranger Dickey Baker recalled crossing paths with Sullivan early in his career. Baker saw the tan ranger hat that Sullivan kept in his truck as a souvenir. It had two scorched holes where a lightning bolt supposedly entered and exited. “He used to haul it around with him,” recalls Baker, who also saw Sullivan’s wristwatch that got toasted black by another bolt.

Below are the legendary accounts of each of Roy C. Sullivan’s lightning strikes:

Strike 1
The first documented lightning strike of Sullivan happened in April of 1942. He was hiding from a thunderstorm in a newly built fire lookout tower that was awaiting the installation of a lightning rod. Roy said the tower was hit seven or eight times during the storm and that “fire was jumping all over the place” inside the tower. Sullivan ran out of the tower and only made it a few feet before he was hit by what he considered to be his worst lightning strike. It burned a half-inch strip all along his right leg, hit his toe, blew off his toenail, and tore a hole in his shoe.

Strike 2
Sullivan went 27 years before he was hit again in July 1969. This time he was hit while in his truck and driving on a mountain road. Sullivan says that lightning struck two trees on one side of the road, then jumped to another tree on the other side. Unfortunately, his truck was in the middle, with both windows rolled down. The strike knocked Sullivan unconscious and burned off his eyebrows and eyelashes, and set his hair on fire. The truck kept moving and nearly ran off a cliff edge.

Strike 3
In 1970, Sullivan was off-duty and working in his garden at home when lightning hit a nearby power transformer then jumped to his left shoulder. Sullivan was knocked to the ground and received some minor burns.

Strike 4
In 1972, Sullivan was hit for the fourth time and sat on fire while working inside a ranger station in Shenandoah National Park. The strike set his hair on fire and he tried to smother the flames with his jacket. “There was a gentle rain, but no thunder, until just one big clap, the loudest thing I ever heard,” he said. “When my ears stopped ringing, I heard something sizzling. It was my hair on fire. The flames were up six inches.” He rushed to the restroom, and used a wet towel to extinguish the flames. It’s reported that Sullivan began carrying a pitcher of water with him in case his hair was set on fire again.

Strike 5
On August 7, 1973, while patrolling in the park, Sullivan saw a storm cloud forming and drove away quickly trying to outrun the storm. He said later that the ominous cloud seemed to be following him. When he thought he had outrun it, he decided it was safe to leave his truck. Soon after, he was struck by a lightning bolt. Sullivan stated that he actually saw the bolt that hit him. The lightning set his hair on fire, moved down his left arm and left leg and knocked off his shoe.

Strike 6
The next strike, on June 5, 1976, injured Sullivan’s ankle. Sullivan was walking along a park trail when he saw a storm cloud and tried to outrun it. But, he was struck anyway. Roy retired five months later.

Strike 7
The morning of June 25, 1977, Sullivan was trout fishing when lightning found him for the final time. The lightning hit the top of his head, set his hair on fire and burned his chest and stomach. This strike also caused Roy to lose hearing in one ear.

The legend of Roy C. Sullivan is alive and well. And, as most stories do over time, the stories grow, details get twisted, and speculation grows. While many doubt Sullivan’s tales, his family doctor and Guinness stand by Sullivan and agree that he was one very luck (or unlucky) man. In fact, two of his lightning struck hats are on display at two Guinness World Exhibit Halls.

Unfortunately, the Roy “Human Lightning Rod” Sullivan story doesn’t have a happy ending. On the morning of September 28, 1983, at the age of 71, Sullivan died from a self-inflicted gunshot wound.