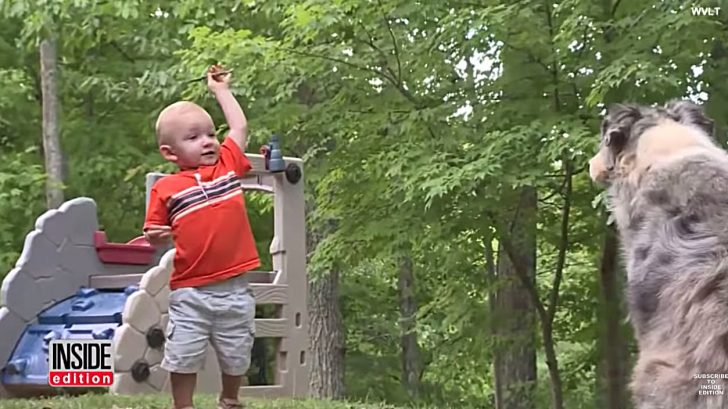 Back in August of 2015, a Tennessee couple Bryan and Alicia Holloway were enjoying a summer afternoon in their yard with their 18-month-old toddler, Bryson, when their Australian Shepherd dog, Shiloh, got into an incident with their child.

Bryson, who was known to be a very energetic and playful kid, would often wander around curiously in the yard playing with his toys and the dog. The Australian Shepherd was never known to be aggressive or hurt Bryon, however, one day, when Bryan and Alicia went outside to check on their child, they saw Shiloh attacking their son.

As they ran over to deal with the situation, panicked and confused as to why Shiloh would attack their son, they soon realized it was for a good reason.

See, a dog’s natural instinct is to protect their humans and they realized Shiloh wasn’t attacking their son but protecting him from a huge Copperhead snake that was laying in the grass right at Bryson’s feet.

Shiloh was literally jumping in the face of danger by placing himself between the toddler and the venomous creature. He barked and wrestled with the snake causing the snake to eventually slither away and flee back into the woods.

The couple’s confusion quickly turned to thankfulness as they were extremely grateful the heroic dog was risking its own life to protect their child.

Shiloh saved the day, however, not without consequences, He was bitten by the venomous snake and he collapsed on the ground not moving. Bryan and Alicia quickly grabbed Shiloh and rushed him to a hospital where he was given antibiotics and antihistamines.

Fortunately, the medicine saved his life, however, his whole body was swollen for a few weeks. He eventually recovered to full health and continued on living his best life.

Bryan and Alicia were later contacted by Inside Edition who drove out to their home and filmed a video with them expressing how thankful they are for their heroic pet.

Watch The Interview With The Pet Owners Below