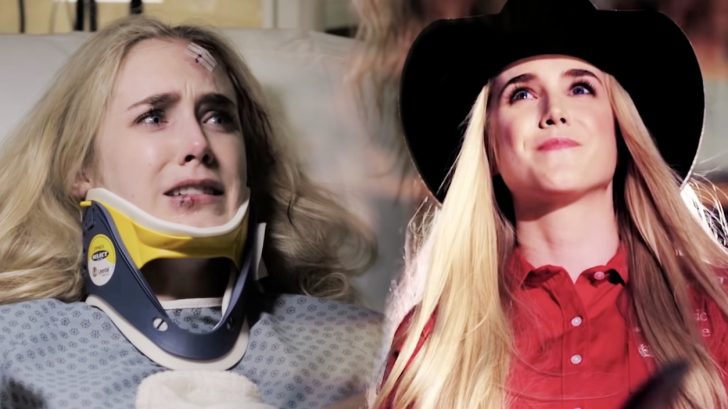 The only thing better than a Netflix Original Movie is when the movie is based on a true story. That’s why the new film, Walk. Ride. Rodeo., which premiered on the streaming platform on March 8, is one of their best.

The film follows the life of nationally ranked barrel racer Amberley Snyder. In 2009, Snyder made it to the National High School Finals Rodeo and won the Finals and World All-Around titles at the National Little Britches Finals.

Not long after, she was driving to the National Western Stock Show in Colorado when she was involved in a roll-over truck accident that nearly killed her, and left her paralyzed from the waist down. Doctors told her she would never recover, and that her rodeo days were over.

Snyder proved everyone wrong by working extremely hard at her physical therapy and was back on a horse just four months later. 18 months after her accident, she figured out how to make a seatbelt for her saddle so she would stay in place and has been competing ever since.

Watch the trailer for the inspiring movie below.

Not only has Snyder competed in more events after her accident than she can count, she actually recently set her Personal Record of 17.1 on a standard set. She also competed in The American, the world’s richest one-day rodeo, in 2015 against some of the best riders in the world and placed 19th in the barrel racing event with a time of 15.369 seconds.

Snyder had an integral role in the filming process – she played her own stunt double!

Because she rides in a very unique way, using vocal commands to her horse instead of her legs, she wanted to make sure the movie was authentic as possible. If they used an able-bodied stunt double, it wouldn’t look the same. Her real-life sister, Autumn Snyder, was Locke’s stunt double before the accident.

When making a movie about your life, you should be your own stunt double right?! ..4 months after my accident was the first time I got back on a horse. 18 months after was the first barrel run. 2015 I ran in the American. Today, I compete at the Pro Rodeos and just set my own personal record of a 17.1 on a standard set!! ⭐️..Walk. Ride. Rodeo. streaming now on Netflix! #amberleysnyder #walkriderodeo #stuntdouble #netflix CINCH JEANS Resistol Classic Equine Purina Performance Horse Farnam Horse Purishield Embrace Victory #icehorse #roho #sve #biomane

Ever since she started barrel racing, music was a huge part of her partnership with her horses.

Because music is such a huge part of how she rides, Snyder and her Walk. Ride. Rodeo. co-star Max Erlich wrote a song that perfectly embodies how Snyder feels when she gets on the back of a horse. Titled “Ride,” the music video features scenes from the film as well as footage Snyder riding a horse around Erlich singing.

Watch the official music video for “Ride” in the video below.