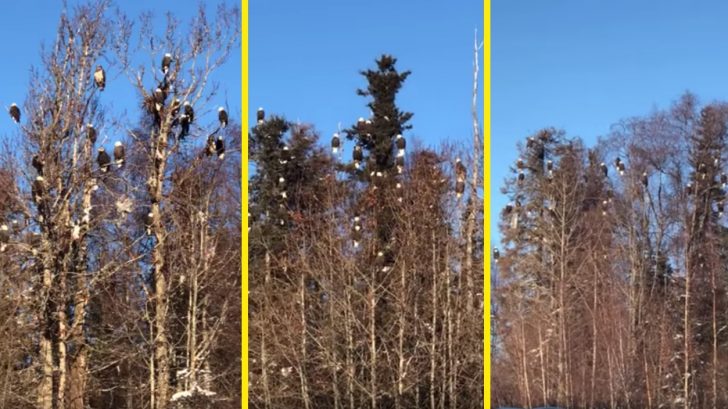 A video has recently surfaced showing a whole lot of eagles perched high up in the winter trees of somewhere deep in the middle of the woods of Tennessee.

The video was submitted to FOX News by Corey Dockter. There must have been over 50 beautiful bald eagles resting together in the trees as if they were part of one big family.

There’s wasn’t a whole lot of information given on the exact location where this was filmed but it makes the mind wonder why so many eagles were perched together like that.

They live about 40 years in the wild and can fly up to speeds of 44 miles per hour. The “bald” in the name bald eagles comes from an Old English term meaning white, referring to the bird’s white head.

In 1782, the bald eagle was declared the national symbol of the United States.

By the 1950s and 1960s, it was considered a species threatened with extinction due to a pesticide causing reproductive failure to eagles in the wild.

The pesticide was banned in 1972 and with the efforts of the Endangered Species Act and aggressive reintroduction programs, the bald eagle population numbers sufficiently increased. By August 9, 2007, the bald eagle was removed from the federal list of threatened and endangered species.

It still receives protection under the Migratory Bird Treaty Act and the bald eagle and Golden Eagle Protection Act and the population is flourishing to this day.

Watch Footage Of The Eagles Below