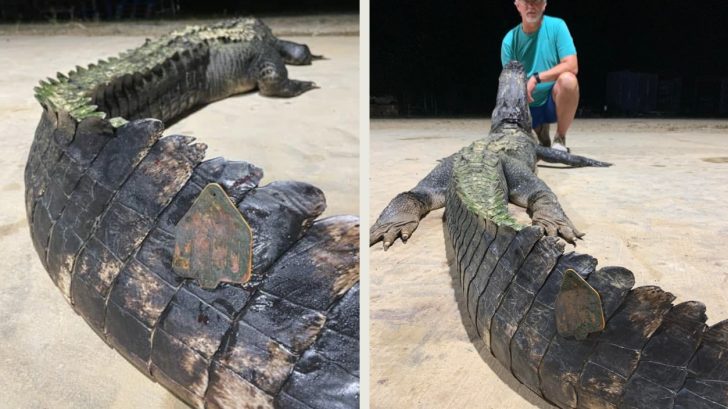 Mississippi Department of Wildlife, Fisheries, and Parks dropped a public press release saying that two alligator hunters just broke the state record for the longest female alligator and noted it was probably the oldest alligator ever found in Florida’s wilderness.

The department wrote in the press release, “On August 28, a new state record for the longest female alligator was taken by two Mississippi alligator hunters, Jim Denson and Richie Denson, of Madison, Mississippi.”

The gator measured 10 feet 2 inches long and was said to have been killed on the Pearl River about 5 miles north of Ross Barnett Reservoir.

Alligator Program Coordinator, Ricky Flynt, with the Mississippi Department of Wildlife, Fisheries, and Parks (MDWFP), said this state record also ties a previous world record for the longest free-ranging wild female alligator, which was measured in the state of Florida in 1984.

That record however was recently broken in Florida in 2021 when a hunter took down a female gator that measured exactly 10 feet 6.75 inches. Flynt says the gator was tagged as “Yellow 410” by the MDWFP in 2009.

“We tagged this alligator on June 11, 2009 as part of a research project. At that time, the alligator also measured exactly 10 feet 2 inches and was captured within 100 yards of where the Densons killed the record alligator,” Flynt said.

The main goal of the research project has been to obtain biological measurements and locations of the gators and hopefully recapture them one day in order to learn more about the reptile’s movements and growth rates.

MDWFP stated that since 2007, more than 800 alligators have been captured and tagged in the state. Flynt explained that many hunters have reported the recaptures of the gators since 2007 and the data that they’ve obtained is like no other data found in the nation.

Flynt says, “Each recapture provides us with interesting data that no other states are obtaining. I am very proud of what we are learning. This is just another example of the value of hunters and hunting to wildlife biologists and wildlife conservation. Much of what biologists know about many species across the world came from similar mark-recapture projects involving hunter harvest data.”

Flynt went into further detail explaining that even though alligators live a very long time, there are still no reliable methods to determine the exact age of the reptile.

Flynt said in the press release, “There are known-age female alligators that have been in captivity for over 35 years in a controlled environment and have only grown to about eight feet long. We have no idea how old Yellow 410 was when it was captured and tagged in 2009, but we do know that over the next 14 years it did not grow even one inch. We have also learned from our research that there are great differences in growth among individual alligators. We have learned that females typically have much slower growth rates (less than two inches per year) while males typically grow faster and can grow as much as 8-12 inches in one year.”

Given that information, Flynt says it’s entirely possible that this record alligator could easily be as much as 75-100 years old. It’s certainly a world-class alligator specimen.

According to the 2022 Public Waters Alligator Hunting Season, the season for hunting gators in the states started on August 26 and will end at noon on Monday, September 5.