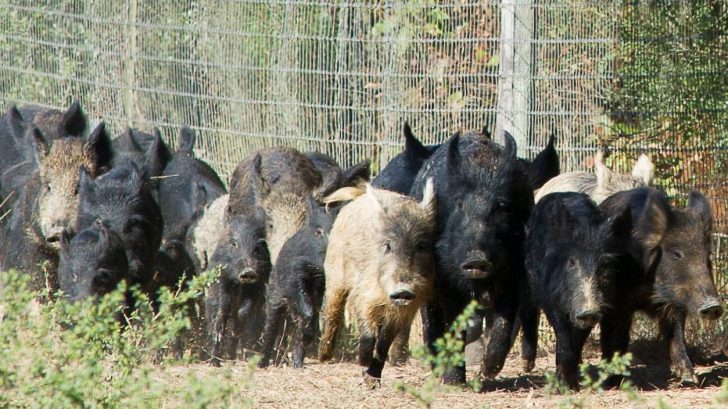 Feral swine, also referred to as hybrid pigs, are a combination of domestic breeds and European wild boar, and over the last three decades, their numbers have dramatically multiplied across 39 U.S. states.

According to Ryan Brook, a University of Saskatchewan biologist, feral swine should occupy 386,000 square miles by the end of 2020, with an expansion speed of about 35,000 square miles a year, The Atlantic reported.

This rapid expansion is referred to by experts “as a feral swine bomb,” Dale Nolte said, the manager of the National Feral Swine Damage Management Program at the U.S. Department of Agriculture.

“What we’d call super-pigs.” Dale told The Atlantic. “They multiply so rapidly. To go from a thousand to two thousand, it’s not a big deal. But if you’ve got a million, it doesn’t take long to get to 4 [million], then 8 million,”

? DO WE NEED A NATIONAL FERAL PIG CULL? The National Farmers Federation is calling for all levels of government to try…

As a combination of two species of pigs, hybrid pigs grow bigger and have larger litters like domestic pigs do. At the same time, they benefit from boar genes so they have heavy fur enabling them to brave hard winters. They are very smart and have an excellent sense of smell.

The expansion is a problem because the damage the hybrid pigs bring to the economy and ecosystem. In Texas, for example, there are 1.5 million hybrid pigs. The state invests $4 million each year into trying to control them. Similar actions were also taken in Florida and California where a large population of hybrid pigs are thriving.

“Pig populations are completely out of control,” Rayan Brook explained toThe Atlantic. “The efforts to deal with them are about 1 percent of what’s currently needed.”