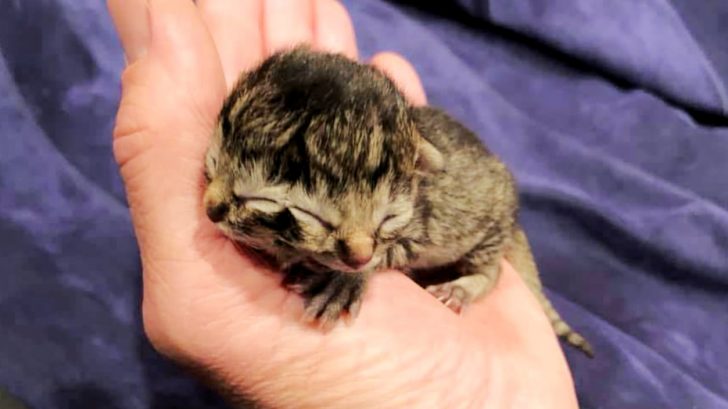 On May 20, Kyla King of Portland, Oregon went outside to check on her pregnant mama cat and discovered she had given birth to six kittens. One of the kittens immediately stood out because it had two mouths, two noses, and four eyes, creating two complete faces.

Kyla and her husband, BJ, named the kitten “Biscuits and Gravy,”

A kitten in Oregon was born with two faces. It's name? Biscuits and Gravy.https://t.co/CQELUgzCbw

Photos the Kings shared of the kitten went viral online, and thousands of people fell in love with the tiny, two-faced cat. The family received many inquires from people wanting to welcome Biscuits and Gravy into their homes, but they chose to keep him, and began providing him with around-the-clock care.

After speaking to their vet, the Kings learned that Biscuits and Gravy had a rare congenital defect called disprosopus or cranial duplication. Cats with this condition are known as “Janus cats,” and their life expectancy is short.

Most cats with the condition generally live no longer than a day after birth.

Kyla and BJ remained hopeful that Biscuits and Gravy would beat the odds like another Janus cat named Frank and Louie. He lived for 15 years, and holds the Guinness World Record for the longest-surviving Janus cat.

After Biscuits and Gravy became a worldwide sensation, the Kings established aFacebook page for people to follow so they could keep up with his journey and fight for survival. Sadly, BJ and Kyla posted an update on March 24 to announce that Biscuits and Gravy had passed away:

“Kyla gave up 3 1/2 days of her life to put all of her efforts into saving him,” the post reads. “He was born with the longest of odds and by living nearly 4 days, he beat those odds.”

The Kings explained that even though Biscuits and Gravy “was eating very well” the kitten couldn’t gain weight and “just didn’t grow.”

This photo was taken about an hour before Biscuits died. Kyla gave up 3 1/2 days of her life to put all of her efforts…

The Kings ended their post with a grateful message to all who prayed for and sent well-wishes to Biscuits and Gravy.

A followup post from Kyla served as another “thank you” to people who showed support to them and their special kitten:

“This story has been a story of life and how very precious it is, whether days or years, whether animal or human, life is so very precious and every single life is unique,” Kyla wrote. “I feel so blessed to be a part of the story of Biscuits and Gravy and how he brought joy and hope to so many people.”

I want to thank everyone so much for your kindness and love. This story has been a story of life and how very precious…

Kyla shared that Biscuits and Gravy passed away in her hands. Now that he’s gone, she and BJ will continue caring for his five siblings, saying “they are just as precious.”

There’s no doubt that Biscuits and Gravy will be missed. Watch the Kings introduce him during an interview in the clip below.