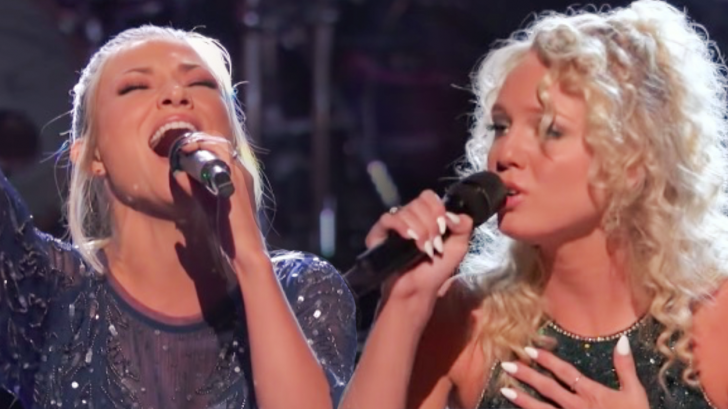 The Voice Can Bring On The Emotions

Those who have tuned in to The Voice know that certain episodes can be an emotional roller coaster.

Sometimes you feel pumped up after hearing a powerful rock performance or a soulful country jam.

Other times, you find yourself crying into a wad of tissues as you listen to someone pour their heart and soul into an emotional song.

Shelton’s choice to pair Katrina Cain with Rachel Messer in the battles was an interesting one. The two singers’ styles couldn’t be any more different, with Cain being an electro-pop artist and Messer being a full-on country girl.

Messer even yodeled during her blind audition!

But it’s clear Shelton knew what he was doing when he paired Cain and Messer together for the battles. He looked beyond genre, and focused on nothing more than the raw beauty of their voices.

To showcase that beauty, Shelton had the two talented singers perform what is undoubtedly one of the world’s most emotional songs….Sarah McLachlan’s “Angel.”

This Song Always Brings The Tears

Written solely by McLachlan, “Angel” was how she expressed her feelings after the loss of Smashing Pumpkins keyboard player, Jonathan Melvoin. Years later, the song was used in an extremely successful advertisement for the ASPCA, in which McLachlan also served as a spokesperson.

With people already having such strong feelings attached to “Angel,” it was guaranteed that Cain and Messer’s battle performance was going to earn an emotional response.

The two took a tender approach to their performance, resulting in more than one spine-tingling moment. Jennifer Hudson summed up their battle best when she described it as “simply beautiful.”

It was obvious that Shelton didn’t have an easy choice to make when it came to picking the winner of the battle. As he said, “I really wish I could move forward with both of you.”

But at the end of it all, Shelton had to make a pick, and he picked Cain. It seemed like a logical choice for him to make, especially after hearing how the audience responded to her solos.

You can watch part of her emotional battle performance against Messer in the video below. Be prepared for the tears to start flowing…