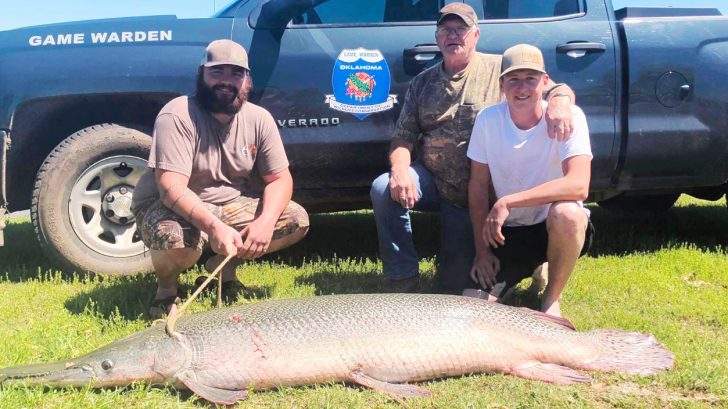 One Oklahoma man got the surprise of a lifetime while bowfishing over the weekend.

Zachary Sutterfield of Durant, OK, was out fishing with family members on beautiful Lake Texoma when he caught a 6ft 9in long alligator gar. The fish weighed in at 170 pounds – being one of the biggest catches in the state’s history.

The Oklahoma Game Wardens posted a photo of Zachary with his catch alongside Nic and Billy Sutterfield who were thankfully there to help him wrangle in the big guy!

According to the Oklahoma Game Wardens,

“Zachary prides himself in being a conservationist. He allowed ODWC (Oklahoma Department of Wildlife Conservation) biologist Richard Snow to come and gather data from the gar for important research.”

As it turns out, alligator gar are actually a type of prehistoric fish. They are truly remarkable creatures of the sea as fossil records date their existence back to over one hundred million years ago. Not only are the alligator gar the largest species in the gar family but also the largest freshwater fishes in North America alone. Often referred to as “living fossils,” they have maintained some of the characteristics from their ancestors including the ability to breathe in both air and water.

While this Oklahoma catch was a big one, it didn’t beat out the state record.

Paul Easley just made Oklahoma history by reeling in the biggest fish ever caught in state waters! See how big this alligator gar is >> http://bit.ly/1KxlpGF

If you’re interested in bowfishing, check out the video below.