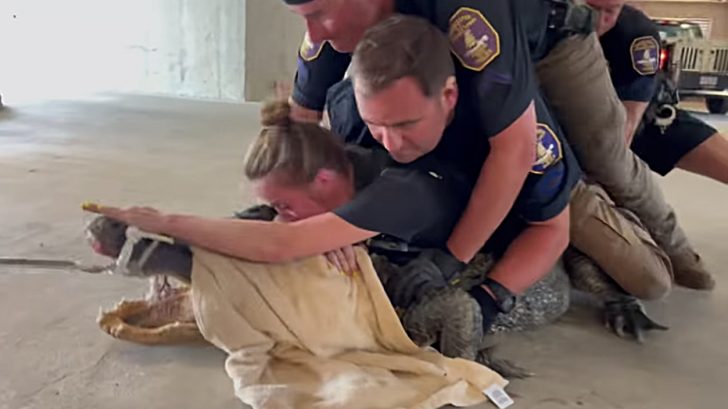 The City of Charleston Police Department shared a few photos and a video of them removing a massive 9-foot alligator from a parking garage in a South Carolina apartment complex.

The department said the incident went down on Friday (May 20) after a resident of the apartment complex was walking their dog around 3pm and spotted the big beast after stepping out of an elevator in the garage.

The resident quickly alerted the apartment staff and called the police, who drove out to the scene to wrangle the gator. It took them along with the aid of Animal Control Supervisor Courtney Bayles to get the gator wrangled down.

Video footage shared on May 23 showed Supervisor Bayles literally leaping on its back like a professional wrestler in order to bring the reptile under control.

Right as she jumped on its back, two more men from the department jumped on top of Bayles’ back to keep the gator from throwing her off.

Once the gator was held down properly, two more officers grabbed the alligator by the snout and started wrapping its mouth with tape to prevent it from biting anyone.

The team quickly worked together and within 30 seconds, they had the animal wrangled and under control.

Since sharing the video on Facebook, it has gotten more than 20,000 views in less than a day.

“I feel like that woman in the front drew the short straw,” Matchew Allean wrote on Facebook.

“Kudos to the female officer on the bottom of the pile for sustaining the weight (400+ pds.) of male officers on top of her while trying to restrain the suspect!” Matt Dailey said.

“Charleston PD gator wrestling team, where I do sign up,” Joshua Perryman posted.

Authorities said that after capturing the gator, it was hauled “a short distance away” from the apartments and released unharmed into a pond.

Watch Footage Of The Encounter Below