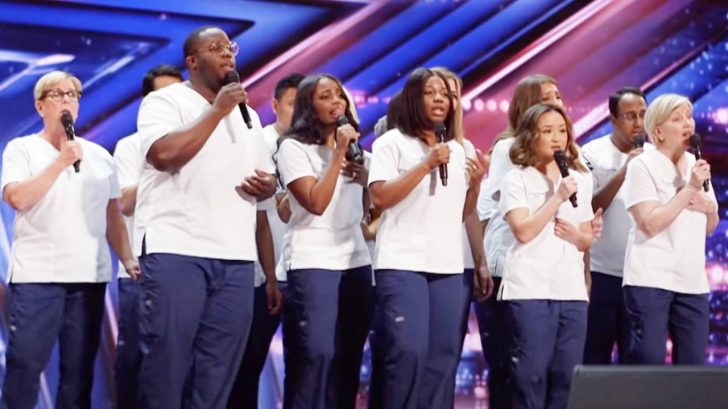 During the past year-plus, no one has worked harder than the country’s frontline workers. The COVID-19 pandemic has affected just about everyone and these nurses from New York knew that they had to do something to lift people up from all the sadness. So, they formed the Northwell Health Nurse Choir.

They are just that…nurses, not professional singers, trying to bring light to people’s lives which have gotten so dark over the last 16 or so months. According to their Instagram page, they hail from different hospitals around New York and their goal is to lift spirits and show that hope can always be found.

The Northwell Nurse Choir previously lent their talents to Nurse Heroes Live! back in November 2020 when they performed with Broadway star Leslie Odom Jr. That performance went so well that they auditioned for the 16th season of America’s Got Talent.

Their audition was on the season premiere, which aired on Tuesday, June 1, 2021. Before their audition, the nurses spoke about the toll that COVID-19 has taken not only on the country, but on them personally, which included being scared to even hug their own children.

They performed two very appropriate songs, Bill Withers’ “Lean On Me” and Bill E. King’s “Stand By Me,” as a mash-up that included masterful solos, perfect harmonies, and even beat-boxing! Each singer was able to showcase a little something and although they aren’t professional singers, they are all extremely talented.

All four judges loved the performance so much, each praising them for being so inspirational. But they really struck a chord with Howie Mandel, who said, “One word comes to mind and it’s ‘heroic.'”

Mandel took his judging opportunity to press the coveted golden buzzer, which will send them straight to the live shows later in the season. Gold confetti exploded on the stage as the Northwell Nurse Choir jumped and cheered in excitement.

“You are the most inspiring moment that I have had in the last year. Not only for who you are, but for what you do,” Mandel told them.

Watch their audition below.