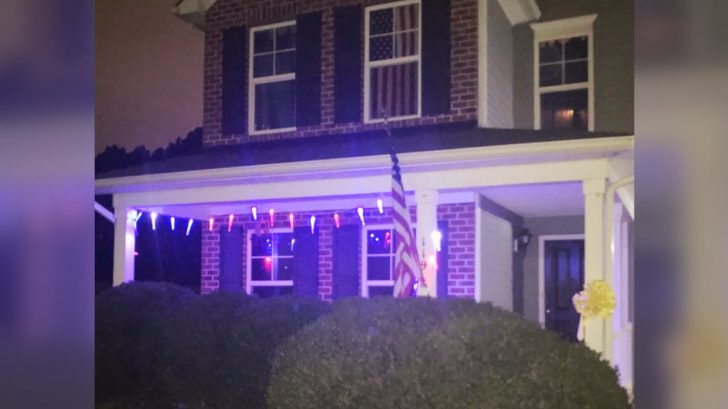 In 2019, Nancy Turner purchased some LED icicle lights to display on her porch at her North Carolina home during the holiday season. The festive lights, which flashed green, white, and red, can be controlled through an app on Turner’s phone.

One day after Christmas, Turner noticed she could change the color of the lights. She found a setting for the 4th of July, and decided to turn that on. She took down all her other outdoor Christmas decorations, but left up a single strand of lights that now flash the colors of the U.S. flag.

There’s a reason why Turner wanted to put on such a patriotic display. Her son is currently serving in the Army, and is away from home.

She also was well-aware of the rising military tensions in January, especially since her son is part of the 82nd Airborne Division that was shipped out to Iran at that time. Ten U.S. service members have passed away since the start of the year, and two of those people had ties to North Carolina.

So Turner left her red, white, and blue lights up to honor her son, the lost service members, and the military in general.

Nancy Turner’s modern version of keeping a candle in the window while her soldier son is away is a string of electric lights on the front porch that burn red, white and blue. Her homeowners association, however, decided it was a covenant violation. https://t.co/upP39dhlqh

Turner reviewed her HOA agreement, and noted there is a rule concerning the display of “holiday lights.” The rule states that holiday lights can only be displayed during the five weeks leading up to Christmas and for three weeks after.

However, Turner says the agreement doesn’t specify any rules about general, decorative lights.

“Nowhere in there does it say you can’t have decorative lights outside your house,” Turner told The News & Observer. “It does say seasonal lights five weeks prior and three weeks after, but it never explains what those holidays are.”

She also noted that there is one house in the neighborhood that has always displayed white lights along its fence, and those have never been an issue.

Since the colors of her lights can be changed and aren’t always Christmas-themed, Turner emailed Sentry back.

“Turner says she sent an email back to Sentry to explain that these were no longer Christmas lights, but were now serving to honor and remember her son and others like him in the service of their country,” The News & Observer writes.

However, Sentry still said this is “not an allowed use of holiday lights.”

Turner told The News & Observer Sentry would allow her to recognize Valentine’s Day if she changed her lights to only red, but they wanted them to come down after that.

Knowing that she can’t afford the $50 daily fine if she keeps the lights up for too long, Turner has decided to leave the lights on display until March 9. After that, she’ll bring them inside and hang them over the windows.

HOLIDAY HASSLE: A Garner woman has these red, white, and blue lights up on her home. They are in honor of her son stationed at Fort Bragg. Her HOA covenant rules state the lights must come down after the “holiday season” or be fined. #ABC11 pic.twitter.com/bGs9RNNNe7

But she may not have to take them down after all.

Brad Pomp, the President of Sentry, spoke with The News & Observer about the situation. He reviewed the conversations between Turner and Sentry, and told the staff in her neighborhood to hold off on any enforcement against her.

“We’re going to step back,” Pomp said, noting that the HOA Board was potentially going to schedule a meeting over the weekend to come up with a “neighborly solution” for Turner.

Despite all this, Turner doesn’t hold anything against the HOA or Sentry. “I am in no way criticizing the HOA board,” she said.

You can learn more about this whole situation by tuning in to the video below.