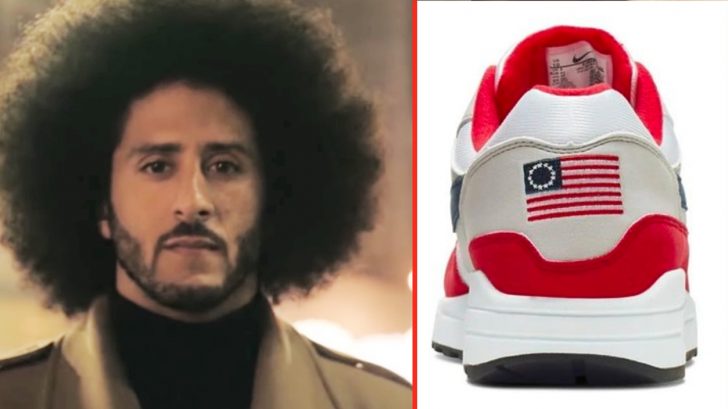 With Independence Day this week, Nike planned on rolling out an American flag-themed shoe, called the Air Max 1 Quick Strike Fourth of July, that was going to retail for $140 a pair.

The company originally planned to release them on Monday, July 1, but at the last second, Nike announced they won’t be dropping the white sneakers with red and tan accents, and a blue swoosh. The back of the shoe featured what’s known as the Betsy Ross flag.

Independence day Air Max 1 with the Betsy Ross flag on the back is nice. pic.twitter.com/lrhUOwfBtD

The Betsy Ross flag is an early design of the American flag, which has 13 red and white stripes as well as 13 stars in a circle representing the 13 colonies. It is named after upholsterer and flag maker Betsy Ross.

#OnThisDay in 1777, the Second Continental Congress adopts the flag of the United States. According to legend, Philadelphia seamstress Betsy Ross designed the new design for the flag at the request of General George Washington. #FlagDay pic.twitter.com/4VcoERGEd1

The reason a Nike spokeswoman told The Wall Street Journal that the company “has chosen not to release the Air Max 1 Quick Strike Fourth of July as it featured the old version of the American flag” is because of former NFL player Colin Kaepernick.

The Journal reports, “After images of the shoe were posted online, Mr. Kaepernick, a Nike endorser, reached out to company officials saying that he and others felt the Betsy Ross flag is an offensive symbol because of its connection to an era of slavery.”

Kaepernick, who famously took a knee during the National Anthem beginning in 2016 to protest police brutality, is a spokesperson for Nike, appearing in “Just Do It” campaigns last year.

Nike Is Pulling A Sneaker With The Betsy Ross Flag That Some Found Offensive https://t.co/oWGGmRY86J #buzzfeed pic.twitter.com/dtRXajnRiw

Nike’s decision has sparked lots of controversy online, with the Governor of Arizona feeling so strongly about it that he announced he was pulling the incentives for a Nike plant in his state.

The Governor of Arizona has ordered the state to rescind financial incentives for Nike in Arizona following the company’s decision to pull its upcoming Betsy Ross Flag sneaker after intervention from Colin Kaepernick $NKE pic.twitter.com/ykJOEOUlsY

See some other reactions below.

We were always told that Kaepernick wasn't protesting the flag. He was protesting police brutality, allegedly. But apparently it was about the flag all along. What a shocking twist.

Does THIS Flag offend you too?!

“He just saved Nike from themselves.” @carronJphillips explains how Colin Kaepernick used his influence at Nike to stop their line of sneakers featuring the Betsy Ross flag pic.twitter.com/wnaL1lIhSJ

Watch a report on the new Kaepernick controversy below.