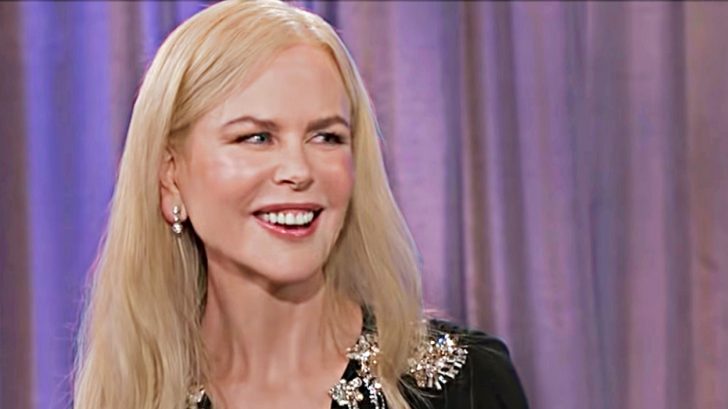 During an interview on Jimmy Kimmel Live, actress Nicole Kidman opened up about her movie roles, winning Emmys, and how her daughters reacted to her awards. Let’s just say, one of her daughters knew exactly what to say to her award-winning mommy…

Thanks for having me @jimmykimmellive for #DestroyerMovie and #Aquaman. So much fun!

When Kidman sat down to talk to Kimmel, the crowd was going wild. Kimmel joked with the Hollywood star that, “there are a couple of your country people here tonight.” While she was born in Hawaii, Kidman is actually a citizen of Australia as well!

She even caught herself a famous Australian country singer! You might know him as Keith Urban.

To honor International #DayoftheGirl – filmed by Sunday and Faith!!! @KeithUrban

Kidman just smiled, knowing her audience and said, “That’s who’s making all the noise!” She then invited the crowd to hang out with her at her house after the show.

Award Shows All The Time

Kimmel went on to ask Kidman about all the awards she has won. He asked, “Are you so sick of going to all the award shows?” He then went on to explain that the couple is always at each other’s award ceremonies to support each other. Nicole simply reminded Kimmel that marriage is all about being there for the other person and said, “We’re married.”

Her Daughters Respond To Her Emmy Wins

It turns out, Kidman’s daughters both love their mom’s Emmy awards. So when she was given two of them, she decided to fairly split them up in their rooms.

But while Faith was glad to take the award, Sunday had a hilarious response to her mom’s big win. Kidman explained, “Sunday didn’t want it. She’s like ‘I wanna earn my own.'”

Supportive Of Her Daughter’s Dreams

Luckily, her mom didn’t take it too personally – she actually loved her daughter’s drive and said, “You go, girl.” With rockstar parents like Keith Urban and Nicole Kidman, it is definitely in the cards for this ambitious young lady.

You can watch the full interview below and let us know what you think in the comments.