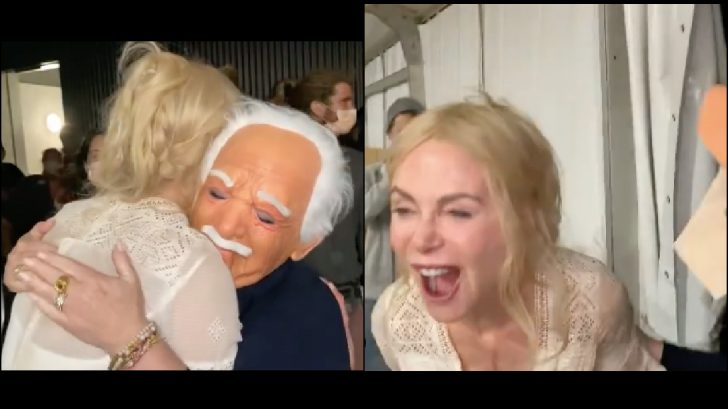 Nicole Kidman was brought to tears, in a good way, when her Nine Perfect Strangers co-star pulled off an epic prank on the actress.

In a video posted to Instagram, Kidman’s fellow actress Melissa McCarthy walks up to her donning a rubber mask with white hair, bushy eyebrows and a mustache. As McCarthy approached Kidman, she stretched her arms out wide as asked for a hug. Kidman turns and hesitates, unsure if she should hug the masked person.

But, as soon as she realized it was McCarthy, she squealed with laughter and embraced her while laughing. Nicole joked that she would hug anyone, then admits that she was scared when she first saw the mask.

Nine Perfect Strangers is a Hulu mini-series that premiered in August. The show follows nine strangers who gather for a 10-day retreat at Tranquillum House, a health and wellness resort founded by Kidman’s character, Masha. But, the resort is more than the guests bargained for as they “discover many secrets about each other and the resort’s host Masha.”

The series was met with rave reviews and became the most-watched Hulu original ever. See the trailer below.