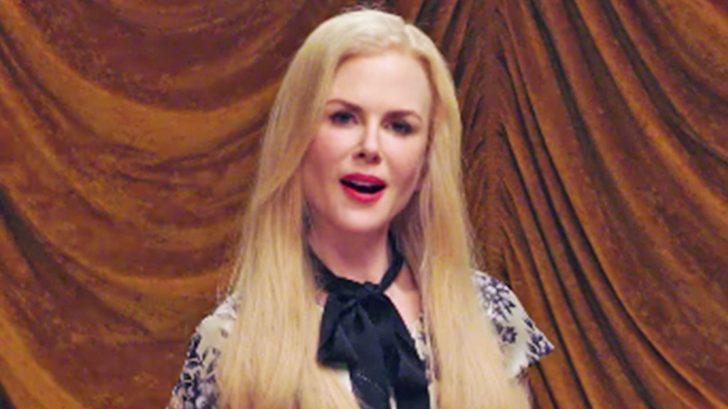 In a new series of videos from Vanity Fair, celebrities have been debuting their hidden talents in what the magazine calls “Secret Talent Theatre.”

Previous videos include Natalie Portman translating Hebrew slang and Emma Stone hopping on a pogo stick. Each celebrity’s talent is definitely something we never knew they could do or would even be remotely interested in doing.

We all know that Nicole Kidman is extremely talented. Her skills include being an incredible actress, an amazing wife to country star Keith Urban, and she can sing!

One thing we didn’t know about her, which she happily revealed on Vanity Fair‘s YouTube channel, was her affinity for eating bugs.

“My name is Nicole Kidman and I am going to eat a four-course meal of bugs!” she said. “I am here to reveal my hidden talent of eating micro livestock.”

Her first course was a blue worm-looking bug called hornworms. She dove right in, using chopsticks as her utensil of choice.

“They’re still alive,” she said before putting one in her mouth and crunching away, calling the taste, “Extraordinary!”

As she was getting ready for the second course, a delectable tray of mealworms, the Academy Award-winning actress said, “Just a side note, two billion people in the world eat bugs, and I am one of them!”

The next course was crickets, which Kidman loved. She called them “awesome.” For the final course, Kidman feasted on fried grasshoppers, which the Big Little Lies star couldn’t stop raving about.

“These are amazing,” she said in between bites. “These are exquisite…I recommend them to anyone!”

Because of her hidden talent, the actress said she could definitely win Survivor and we can’t disagree! We wouldn’t be able to stomach those bugs. Watch her secret talent of eating bugs in the video below.