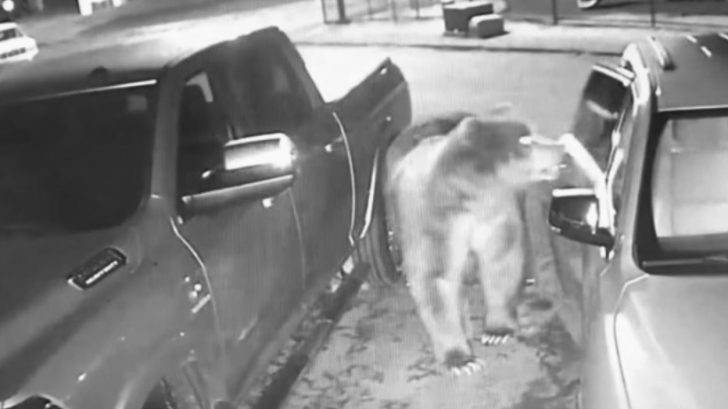 There’s a reason why those who live or camp in bear country are told to dispose of their trash in bear-proof containers. Bears are crafty and strong, which means that ordinary trash cans are no match for them when they’re hungry and want a snack.

According to a brochure from the National Park Service about black bears in particular, “When bears become habituated to human food and garbage, they can become aggressive, dangerous, and may break into cars, RVs, and tents.”

It makes it even easier for bears to “break into cars” if the cars are left unlocked, as one video proves.

The Alaska’s News Source Facebook page shared a video Jeff Brouse sent them of a bear in Kodiak. It appears the footage came from a security camera, because there is a timestamp and a date.

All seems calm at first as the camera shows the scene. There were two parked vehicles, a truck and a car, and there was a playground behind them.

Suddenly, a large bear entered the frame and peeked around the back of the car. It then walked between the two vehicles and appeared to sniff the bed of the truck.

Not interested in whatever it smelled in the truck, the bear then turned to the car. With no trouble at all, the bear reached forward and opened the car’s back door with its mouth.

The bear poked its head inside the door, but found nothing of interest. It backed away and walked out of sight as quickly as it appeared.

Alaska’s News Source said this video serves as a warning to make sure your car doors are locked if you park outdoors in bear country. “This is a good reminder to lock your doors, keep food out of your car and always be bear aware,” the outlet said.

Check out the clip of the clever bear opening the car door below. It’s a pretty remarkable thing to watch!