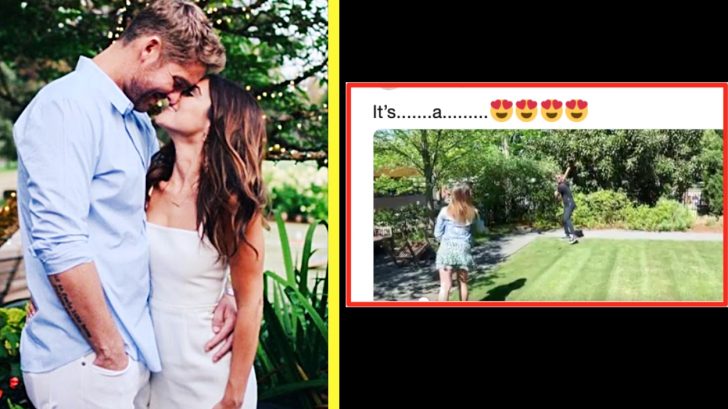 Just a few months ago, this country music singer made a joke about being ready for kids just shortly after marrying his longtime sweetheart in November of 2018.

Well, it appears that Brett Young wasn’t joking after all!

Currently, California dreaming…because in just a matter of days I’ll be with this hunk in our old stomping grounds, which also happens to be a place where “bathing suit weather” is all year around #SantaMonica #LA #HOME #Caliville

The 38-year-old singer and newlywed husband has been leading a career in country music and topping the charts as he goes! But, somewhere along the way to follow his passion, he found himself also leading a 10-year-long love story with now-wife Taylor Mills.

Young and Mills tied the knot in November 2018 at Bighorn Golf Club in Palm Desert, California – but that big, wonderful day didn’t come without a long story that will melt anyone’s heart. (Watch their love story below.)

The two first met more than 10 years ago in Arizona and finally were able to tie the knot, but shortly after, Young told People Magazine that they wanted kids sooner rather than later.

“Being able to be best friends with a person you’re going to spend the rest of your life with is the most important thing,” Young told the publication. “She has a very pure, kind heart.”

“We’ve been together for a long time and we do want kids soon.”

It looks like that dream has come true for this sweet couple and they’ve not only shared the news that they are expecting their first child, but they also gave fans a peek at their very cute baby gender reveal!

Taking to social media on April 6th, 2019, Brett Young shared the news that he and Taylor Mills Young were expecting a child in the fall, saying cutely “And then there were 3!”

And then we were 3 ?????? Taylor and I are absolutely over the moon to be expecting a new little angel into our family. Absolutely blessed to be starting this new chapter with my baby and our baby ??? Thank you to @people for help us break the news!

But now, he’s followed that up with a new post (April 16th, 2019) that showed a video of doctors checking the baby’s heartbeat, and one where Mills Young was throwing a loaded baseball toward her husband – he gave it a good whack with a baseball bat and it exploded into a cloud of colored dust!

The heartbeat clue is based off an old wives’ tale that says if a baby has a heartbeat higher than 140, it will likely be a girl…but if it’s lower – it’ll be a boy! In the video, you can see that the baby has a heart rate of 155…

Check out their adorable gender reveal in the video below and let us know if you think this wives tale is true!