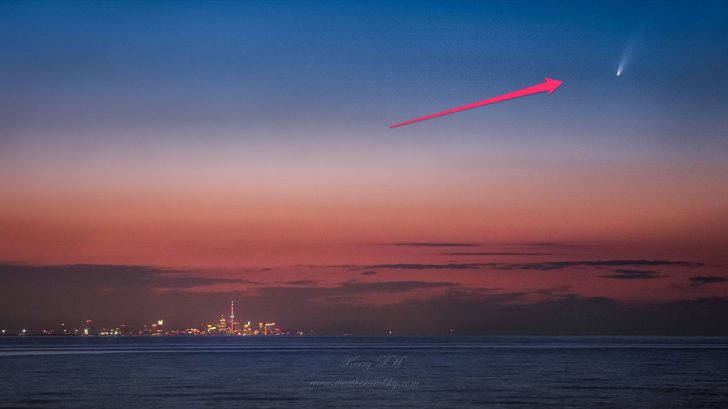 NASA’s Near-Earth Object Wide-field Infrared Survey Explorer (NEOWISE) mission discovered a new comet on March 27, 2020, using its two infrared channels, which are sensitive to the heat signatures given off by the object as the Sun started to turn up the heat. The comets official name is C/2020 F3 but it has been given the nickname, ‘NEOWISE comet.’

.@apod 2020 July 9 – These silvery blue waves washing over a tree-lined horizon in the eastern French Alps are noctilucent clouds. From high in planet Earth's mesosphere, they reflect sunlight in this predawn skyscape taken on July 8. Above, #cometNEOWISE. https://t.co/EYqAVnzhG9 pic.twitter.com/hXVFwgZKI1

The comet swept past the sun on July 3, 2020. The suns rays combined with solar winds, brightened it, and caused it to release gases and form a tail, thus becoming visible to the naked eye. The rare opportunity to glimpse the chunk of ancient ice from the outer solar system should continue into next week.

How cool is comet Neowise ?? pic.twitter.com/H5l8vn0tA9

For the next few days it will be visible to the naked eye about an hour before sunrise, close to the horizon in the northeastern sky in the United States. On July 11, 2020 the comet will reach its highest point on the horizon, about 10 degrees above the horizon line, at dawn. After that, the comet can be seen at dusk in the northwestern sky, initially appearing low on the horizon, but climbing higher in the sky as the month continues.

Watch the video below to see the comet from the view of the International Space Station.

A comet is visiting from the most distant parts of our solar system and making a once-in-a-lifetime visit to our twilight skies! Below are images of comet C/2020 F3 NEOWISE as seen by @ISS_Research. Learn more about the comet and how to watch it: https://t.co/HGlMtyCCFU pic.twitter.com/krG2yC1MpZ