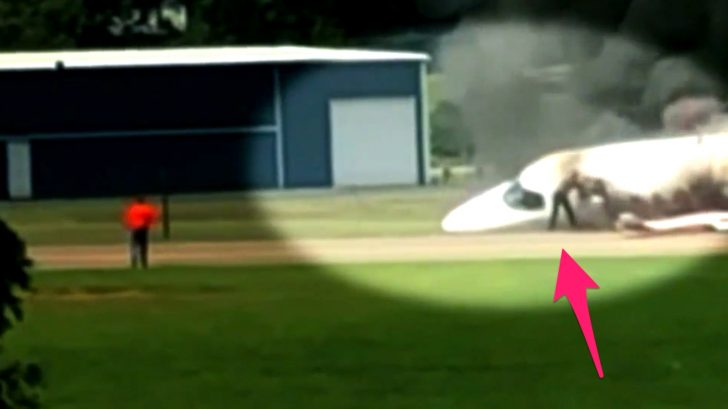 The small municipal airport sits just outside of Bristol – where Dale Earnhardt Jr. was headed for his job as a news broadcaster for NBC Sports. He was scheduled to be working during this weekend’s race.

Miraculously, all aboard the plane were able to escape with nothing more than cuts and bruises. But the cause of the plane crash is still under investigation.

Investigators believe something caused the landing gear to fail and that failure was a contributing factor to the crash in a major way.

Oh God! Terrifying video shows #DaleEarnhardtJr and his family running out of their plane after it crashed pic.twitter.com/7ojIr0o3JR

Late last week, a video surfaced of Dale Jr. and his wife and baby running away from the plane as it was billowing black clouds of smoke – but a new, high definition video captures the exact moment they got free…and shows how they saved the baby before they even go out themselves.

In the video below from ABC News / WSCO, shows Dale Jr.’s private plane in its final resting place and just starting to smoke. All of a sudden, the door pops open and flames are seen just to the side of the open door.

One man (which looks to be a pilot) jumps out of the plane and then looks back inside beckoning for the others to follow. He reaches into the plane and pulls out little Isla Rose from the hands of someone inside (likely Dale Jr.)

Just seconds later, the man who handed the baby to the pilot jumps out of the door (believed to be Dale Jr.) and then Amy follows, briefly tripping next to the burning plane before running with the family dog, Gus, away from the fiery crash.

Check out the full video below. We are so thankful everyone made it out of this alive.