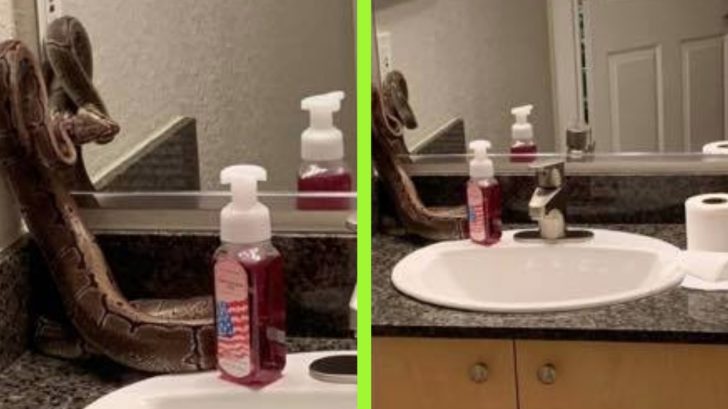 Ali Skipper from Orlando, Florida shared a shocking photo on the Facebook group, Baldwin Park Orlando Neighborhood, of a snake that she unexpectedly found in her bathroom.

“There is a snake in my 2nd story bathroom!!!” she wrote on Facebook, according to Donny Simpson who shared her photos. “Who do we call? I’m freaking out!!!”

According to Ali, the python was apparently left behind by the former tenants who lived in her apartment before she moved in.

Ali said that she believes that the snake was hiding in the refrigerator, which was one of the furniture pieces that was still left behind in the apartment on the day that she moved in.

“The previous resident left it behind. So, it’s been here a few weeks,” she said.

The python was an intimidating 4-feet long and very scary for a girl who was not so fond of the reptile. Fortunately, the slithering, scaly creature was removed from the home so that Ali could continue to live her life in peace.

Ali Skipper is part of a private group on Facebook called Baldwin Park Orlando Neighborhood and she shared the photo in the group and others can’t see it, however, Donny Simpson, who is a part of that group and lives in the same neighborhood shared the photos of the snake so you can take a look.

Take a look at the screenshot that Donny took of Ali’s post below!