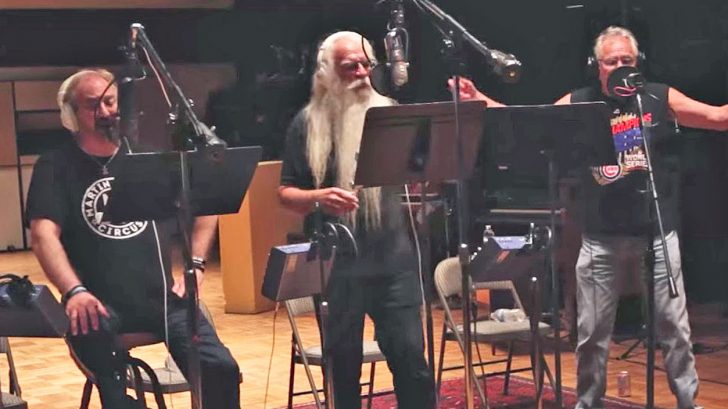 The Oak Ridge Boys remained devoted to gospel music for over 30 years before they decided to make the switch to country in the mid-1970s. It was during this era that the group’s current lineup came to be, including Duane Allen on lead vocals, Joe Bonsall on tenor, William Lee Golden on baritone, and Richard Sterban on bass.

This lineup was the one that brought us some of the group’s greatest hits, such as “Elvira” and “Bobbie Sue.” With the exception of an eight-year break taken by Golden, the Oak Ridge Boys’ lineup has remained the same for 45 years.

The fellas are still going strong, and are now gearing up to release a new album. As announced via a press release on Thursday (January 18), the Oak Ridge Boys are all set to release a new record on March 16.

Titled 17th Avenue Revival, the album was produced by the highly-esteemed producer Dave Cobb, who has also worked with Chris Stapleton, Sturgill Simpson, and Shooter Jennings. This isn’t Cobb’s first time working with the Oak Ridge Boys, as he also served as the producer on their 2009 album, The Boys Are Back.

Under Cobb’s direction, the group decided to revisit their gospel roots, yet took a whole new approach to their old style. They did so by looking at early rock and roll, which drew its influence from black gospel music. It’s the same influence that the Oak Ridge Boys layered throughout the tracks that appear on 17th Avenue Revival.

“Dave brought music with spirit and a magical feel to the studio,” said Golden. “It became a mental, emotional, physical and spiritual revival for The Oak Ridge Boys.”

Fans got the chance to have a first taste of the material on 17th Avenue Revival when the Oak Ridge Boys released the music video for their new song “Brand New Star.” It isn’t a challenge for you to hear the gospel flair in the song, which is quite sprightly despite its somewhat sad subject matter.

You may be too busy singing along to notice at first, but after a bit you’ll realize that “Brand New Star” is actually a mourning song, in a sense. But rather than being melancholy, the song takes on more of a celebratory feeling, with the Oak Ridge Boys singing, “I’m gonna miss you every day, but I know that you’re alright. There’s a brand new star up in heaven tonight.”

This song is so catchy, that it’s sure to be stuck in your head once you listen to it. Though we wouldn’t say that’s a bad thing, because it’s so enjoyable to listen to!

After hearing this, we can’t wait to hear the other songs on the Oak Ridge Boys’ new album. We’ll just have to wait patiently for March 16 to get here!