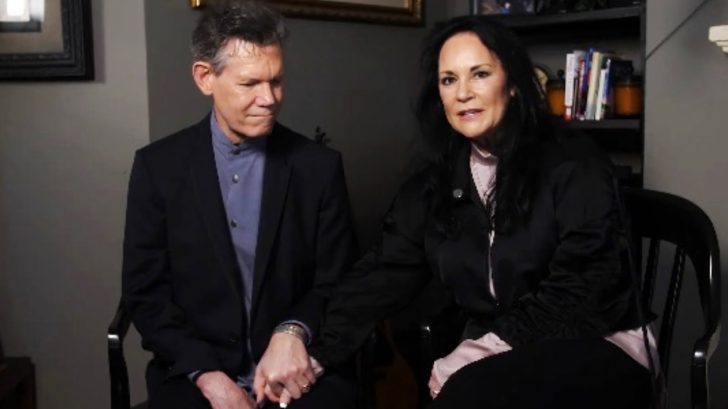 In July 2013, country legend Randy Travis went to the hospital following a viral upper respiratory infection. Just three days later, he suffered a massive stroke and emergency surgery was performed to relieve pressure on his brain.

Later that month, he entered a physical therapy facility where he stayed for several months. Despite all the therapy he was receiving, Travis wasn’t able to sing or speak and required a cane or wheelchair for some time.

By November 2014, he could walk short distances without help and was re-learning how to write and play guitar. A few months later, on March 21, 2015, he married his fiancee Mary Davis. Now, several years after his stroke, he is still slowly improving and is ready to tell his life story.

The country legend will be releasing a memoir titled Forever and Ever, Amen: A Memoir of Music, Faith and Braving the Storms of Life on May 21.

In it, he writes about his upbringing, his rise to stardom, his battle with alcoholism and anger, as well as his recovery. He also writes about the person who has stuck by his side in the hardest moments of his life – his wife Mary.

“I was healthy, in fantastic physical condition, and a highly successful country star when we fell in love. But she married me after I had been incapacitated by a stroke, knowing full well what she was getting herself into,” he writes. “That was a major commitment – a commitment of love.”

Mary tells PEOPLE, “The whole third midsection of Randy’s left brain was affected, which is speaking, writing and reading. But each day there’s something new that he says or does.”

After years of working hard at his recovery, Travis wants other stroke patients to know they aren’t victims.

He writes, “I want stroke patients to know that they don’t have to be stroke victims. They can be stroke survivors and live victoriously despite the physical setbacks they have experienced.”

PEOPLE previewed part of his book and also revealed two rarely-seen photos from early in Travis’ recovery, including one of Mary’s son Raleigh with Travis when he was in the hospital.

Another one shows Travis in a wheelchair, wearing an oxygen canula relearning how to play the guitar.

Take a look at a few more below.

Randy is the epitome of determination, and these photos are proof.

Watch Randy and Mary talk about the importance of the book in the video below.

"Forever and Ever, Amen" ? the highly anticipated memoir is available for preorder NOW from your favorite online retailers. Visit https://t.co/qAikJ0QL23 for more info! pic.twitter.com/yWGSLL9hTj