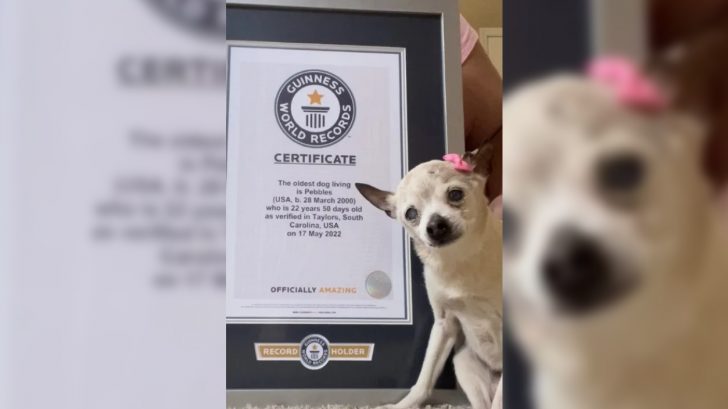 The Guinness World Records just recognized the oldest living dog in the world named Pebbles who is a toy fox terrier that is 22 years and 59 days old.

Pebbles’ owners Bobby and Julie Gregory said they had no idea they were going to end up owning the “Oldest Dog Living” when she came into the family as a puppy so many years ago.

Pebbles lives with Bobby and Julie in Taylors, South Carolina, and was born on March 28, 2000. She weighed four pounds and, according to the family, she loves to listen to country music and sleep in until around five o’clock in the afternoon.

“Bobby was sitting on the couch and friends and family started texting and calling about a story they saw about a 21-year-old dog getting the record,” Julie told Guinness World Records. “When I saw TobyKeith’s story all over the news, I applied.”

Julie said that she, her family, and friends were sure that Pebbles would end up beating TobyKeith, a Chihuahua from Florida who, in April, attained the record for being the oldest dog alive.

Soon after sending in her application to Guinness World Records, Pebbles soon became the new record holder on May 26, 2022.

Even with the dog’s newfound fame, the family said it hasn’t affected her life much. She still lounges around the house listening to her country music and getting affection from her loved ones.

“We truly love her more than anything, so for her to have this time to shine is truly precious to us,” Julie told Guinness World Records.

Watch Footage Of Pebbles Below