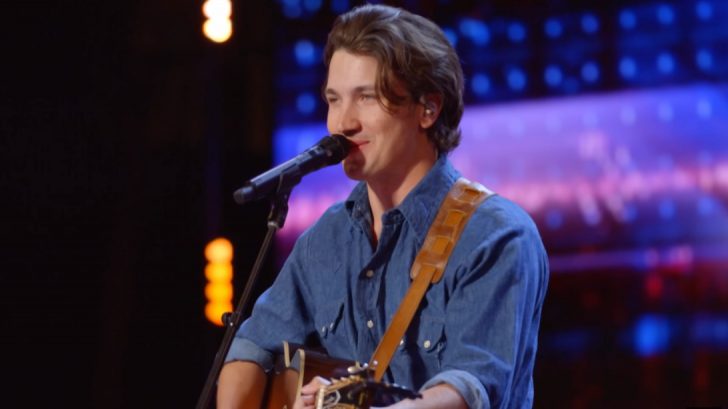 Country singer Drake Milligan earned the title of “new Elvis of country music” after his performance on America’s Got Talent Tuesday night.

The 23-year-old Elvis impersonator took the stage and shared that he moved from Fort Worth, Texas, to Nashville so he could pursue his country music dreams. When asked by Simon about using America’s Got Talent to showcase his talent, Milligan compared the show to the Ed Sullivan Show “back in the day.”

“Elvis had the Ed Sullivan Show, and the Beatles did too. I see this kind of on the same scale as that…almost bigger,” Milligan said.

With the help of his band, Milligan wowed judges Simon Cowell, Heidi Klum, Howie Mandel and Sofia Vergara with his original song “Sounds Like Something I’d Do,” and earned a unanimous pass to the next round of competition.

Simon Cowell agreed, saying: “Sometimes when we get bands on the show, for whatever reason, it really honestly does sound like a mess from the minute it starts. With you it was the opposite. I think this performance should make a difference to what you’re doing because people are going to like you,” Simon said. “The song was really good as well. It was really authentic. That’s what I liked about it…..Everything worked for you today. You’re very likable.”

If Drake Milligan looks familiar to viewers, perhaps it’s because fans remember him from his role on CMT’s 2017 show Sun Records or from his appearance on American Idol in 2018 where he earned a coveted golden ticket to Hollywood with a cover of George Strait’s “You Look So Good In Love.”

“I was praying you didn’t sound like Elvis,” Luke Bryan told Milligan at the time. “You didn’t. You just crushed it. If I see you in Nashville and I hear you do that, I would be fire up there and I’m fired up now. You’re cowboy cool, man.”

Unfortunately, Milligan put the brakes on his American Idol journey before going to Hollywood. In a statement posted to Instagram in April 2018, the singer explained why he quit Idol.

“Been getting a lot of questions about no longer appearing on American Idol after my audition, just thought I’d let y’all know what’s goin’ on!” he wrote. “After my audition I decided that I wasn’t quite ready for that platform yet, and that it would be a better step for me to move to Nashville and focus on my music first!”

The decision appears to have paid off for Drake Milligan who is slowly but surely making a name for himself in Nashville as a singer and songwriter, and recently released his debut EP.

Watch Drake Milligan’s America’s Got Talent audition in the clip below.