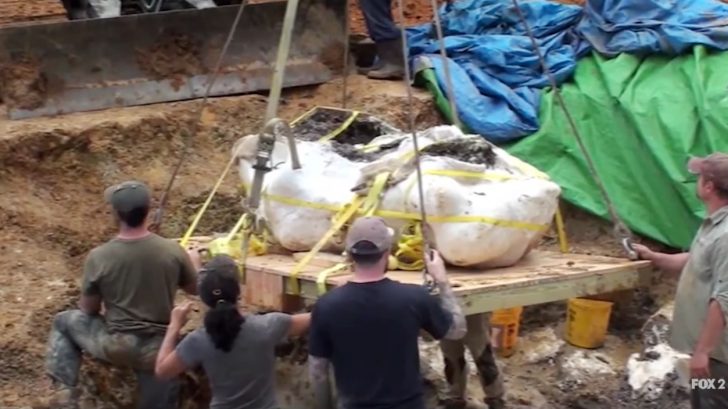 Paleontologist Guy Darrough was digging on a property in Missouri where dinosaur bones were discovered in 1940 and now, 80 years later, he has discovered a new dinosaur that has never been uncovered before.

The specific site in Missouri is being kept a secret in order to keep the bones safe, however, Darrough and a few others have clearance to be there.

While carefully removing dirt on site with his team, Darrough came across the juvenile skeleton of a Parrosaurus Missouriensis and everyone got excited.

“I can’t imagine anything that’s more impressive than what we discovered here.  A new genus in species. Its world-famous discovery,” Darrough told FOX 2 St. Louis.

The remains of a duckbilled dinosaur have never been found before anywhere else in the United States. The Parrosaurus Missouriensis are known to measure up to a colossal 30 feet long and were a force to be reckoned with during its time.

After being slowly and carefully pulled out of the ground, the skeleton was transported to the Sainte Genevieve Museum Learning Center in Genevieve, Missouri.

Darrough then called the Chicago’s Field Museum to speak with Pete Makovicky who is a professor in earth and environmental sciences at the University of Minnesota, and told him the ground-breaking news.

“I eventually talked to Pete Makovicky, curator of dinosaurs at the Field Museum,” Darrough said. “He came down and looked and said, ‘Yeah, you guys got dinosaurs.’”

Pete excitedly went down to the dig site with his team to help and not long after finding the juvenile, they found a full-grown adult Parrosaurus Missouriensis right next to where the juvenile was found.

“This is in fact a remarkable site in one of the best dinosaur locals east of the Great Plains,” Pete said.

Pete has dug up dinosaur bones all over the world and says that the site in Missouri is one of the most unique that he believes has more skeletons to uncover.

Footage From The Site & Interviews Below