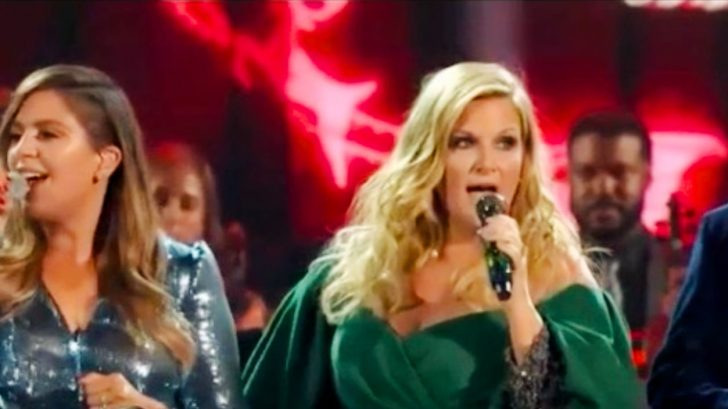 On Tuesday night (December 3), country fans tuned in to their televisions to watch one of their favorite holiday programs…the CMA Country Christmas special.

The special has aired every year since 2010, with Jennifer Nettles acting as its original host. Reba McEntire took over hosting duties in 2017, and led the program for two years.

? Ring in the holiday season with #CMAchristmas, hosted by @TrishaYearwood, with special holiday performances & unforgettable collaborations. ?? Tickets for the Sept. 25 taping in Nashville, TN go on sale THIS FRIDAY at 10 AM|CT on https://t.co/LAr9cvJAAV. pic.twitter.com/mcso8MNxBV

In addition to hosting the show, Yearwood also performed. In fact, she performed more than any other artist that participated in the program!

Yearwood opened the special with a medley of songs, including “Silver Bells,” “Jingle Bell Rock,” and “Winter Wonderland.” She later appeared on stage with other female performers in order to sing “Children Go Where I Send Thee.”

Then, in the next-to-last performance of the night, Yearwood wowed viewers with her rendition of “It Wasn’t His Child.”

Our host @TrishaYearwood knows how to deliver! What a captivating performance of "It Wasn't His Child" on #CMAchristmas ?

After that, Yearwood invited some of the other Country Christmas performers out on stage to join her for the final song, “Feliz Navidad.”

Lady Antebellum, Rascal Flatts, Brett Young, Kristin Chenoweth, Tori Kelly, and CeCe Winans all participated in the fun and lively performance. Viewers got a kick out of the finale, and took to the comments of the CMA’s Instagram post about the performance to express how much they loved it.

If you also enjoyed the closing performance of “Feliz Navidad,” you’re in luck. We have included a short clip of it below.

What a way to end it for the East Coast!!! FELIZ NAVIDAD to all, and to all a good night! ? West Coast, are you loving #CMAchristmas on @ABCNetwork?!

Unfortunately, as of press time the CMA hasn’t uploaded the full finale performance of “Feliz Navidad.”

So to make up for that, we’d like to share another one of our favorite performances from this year’s CMA Country Christmas special!

Tune in to the video below to watch finale performers Lady Antebellum sing their stunning renditions of “On a Night Like This” and “Silent Night.” They are an amazing group, so we’re glad they were involved in the Christmas special this year!