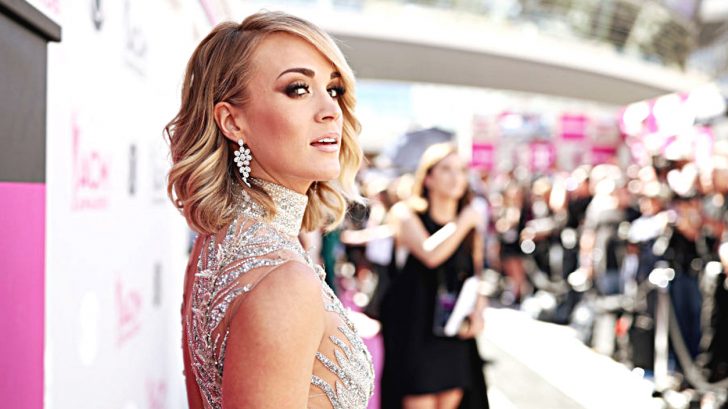 Many questions have surrounded Carrie Underwood ever since she suffered a devastating fall in November that left her with a broken wrist and injuries that resulted in roughly 50 stitches in her face. But, one thing is certain….Carrie Underwood isn’t going to let anything keep her down.

In recent days Carrie has shared two full photos of her face, the first since her fall. The first photo showed the “Jesus, Take The Wheel” singer behind the soundboard in a studio. The second showed Carrie and her band rehearsing for an unknown performance.

Sunday night, Underwood shared a cryptic photo revealing that big things are coming from the star. The photo was a close-up of Carrie’s eye with glitter that looks like tears. The caption simply read, “This Wednesday, April 11. 6am ET.”

The immediate assumption is that Carrie will be releasing a new single on Wednesday. No doubt that the release of any new music from the American Idol champ will be an emotional milestone after everything she’s been through this past year.

If in fact Carrie Underwood is releasing new music this week, does this mean that the rehearsal photo she shared could indicate a performance at Sunday’s (April 15) Academy of Country Music Awards? Carrie is nominated for two of the night’s honors including female vocalist of the year and vocal event of the year, for her duet with Keith Urban on “The Fighter.” If she attends, it would be her first public outing since her accident.

We don’t know about you, but waiting for Wednesday (April 11) is going to feel like waiting for Christmas morning. Whatever the news from Carrie Underwood might be, we are excited to have her back and look forward to what 2018 holds for her!