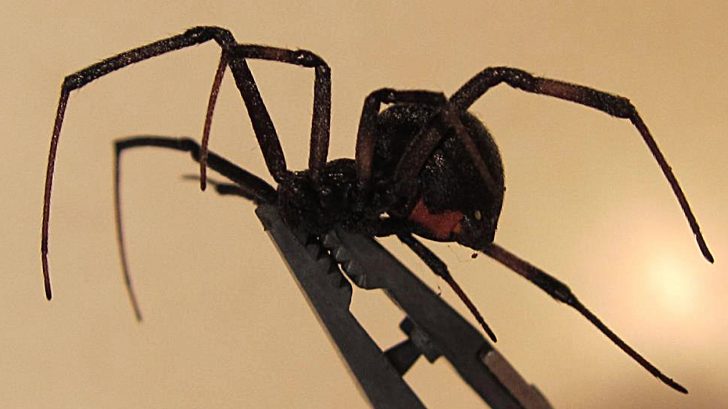 Recently in South Africa scientists have discovered a new species of spider called the Phinda button spider that looks very similar to a black widow spider but has a different red design on its back and lays purple eggs.

We cannot believe it………it's finally out!This morning our paper on the new Latrodectus species was published in…

The spider is kin to the black widow spider, as well as the redback, katipo and 30 other Latrodectus spiders which are all known for delivering a deadly sting of venom to their victims. All of these spiders have been known for decades but the Phinda button spider is the first new species found in years.

In South Africa’s Kwa-Zulu Natal Province, an entomologist named Barbara Wright who works at the Wild Tomorrow Fund was the first to find the spider in 2014. Someone called her about the “weird-looking” spider found in a hollow tree near an elephant park and Barbara quickly drove down to see it.

“We were shocked and completely blown away by the sheer size [of the spider] and the colors,” Barbara told Gizmodo in an email. “We have yet to meet anyone who had seen it before we discovered the first specimen. They are extremely secretive and shy spiders, and hide in tree hollows in a vegetation type that is rare and few people have access to it.”

A new species of spider has been discovered at Phinda! The new 'Phinda Button Spider' is Africa's largest button spider…

They Live In The Ancient Sand Forest

They observed and studied the spider for two years and it wasn’t until it laid the bright purple egg that they realized they were definitely looking at a new species. Showing the picture to Ian Englebrecht, an African arachnids specialist, he too agreed that it was a new species.

Scientists over the years studied the area where the spider was found and was able to locate more of them to observe. They specifically live in the sand forest, a dense forest that sits on top of ancient sand dunes. The forest is rare due to deforestation and the spider is only found in the pristine parts of the forest.

Video Of Phinda Button Spider Below