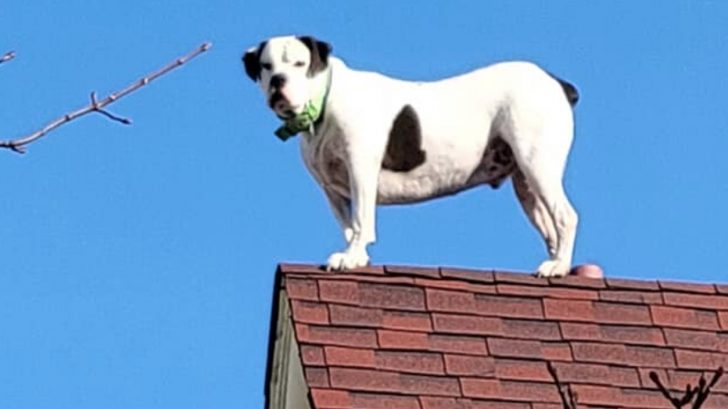 The Hazleton Fire Department released a couple of photos taken of a dog standing on top of a roof and said they were called to the scene after receiving a phone call from someone passing by who noticed the pup.

The incident took place in Hazelton, Pennsylvania on March 14 and firefighters said at first, they were under the impression that the dog was in danger and in need of rescue.

When they arrived on the scene, they found the white and black dog was calmly standing exactly where the resident said it was. However, after speaking with a resident of the home, they found out that the dog does this all the time and is actually a regular “roof-walker.”

They also noticed there was a balcony door on the third floor of the home that gave the dog access to the rooftop.

People reported a spokesperson from Hazelton Fire Department saying, “We were called to an apartment block on Laurel Street to rescue a dog who was stranded on the roof. When we arrived, it became clear the dog did not need rescuing, and we were told that he ‘does it all the time.'”

Realizing it was a false alarm, they simply took a couple of pictures and called off the rescue mission. The building resident gave firefighters further details saying that the pup regularly goes out onto the roof to sunbathe and keep an eye on the neighborhood.

“We were unable to make contact with the dog’s owner, but the dog came down and went into the apartment while we were at the scene,” the fire department stated.

See The Department’s Public Statement Below