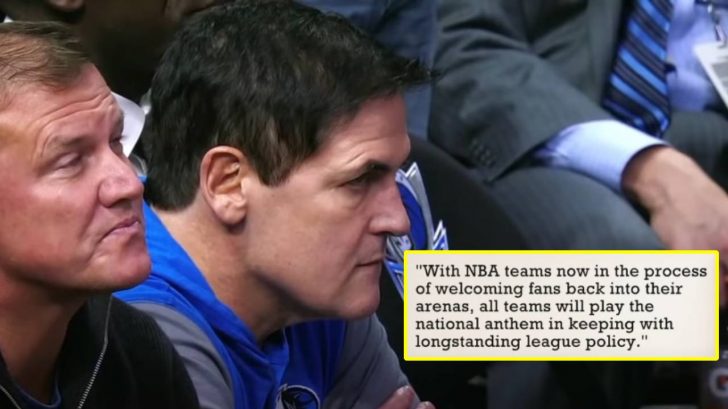 For the entirety of the 2020-2021 NBA season, which kicked off just before Christmas, the Dallas Mavericks have not played the national anthem before their 13 pre-season or regular home games.

Mark Cuban, the Mavericks’ owner and star of Shark Tank, was the person who made this decision for the franchise, which ESPN reports was decided upon after Cuban consulted with NBA commissioner Adam Silver.

On February 10, the NBA released a statement responding to Cuban’s decision:

“With NBA teams now in the process of welcoming fans back into their arenas, all teams will play the national anthem in keeping with longstanding league policy.”

Following the statement, fans were eager to see what Cuban’s response would be, especially since the team had a home game that same night. But instead of fighting back, the Mavericks did what they were instructed to do and played the national anthem before their game against the Minnesota Timberwolves.

Cuban also released a statement prior to the game, saying, “Going forward, our hope is that people will take the same passion they have for this issue and apply the same amount of energy to listen to those who feel differently from them.”

See his full statement below.

Watch ESPN’s coverage of the situation below.