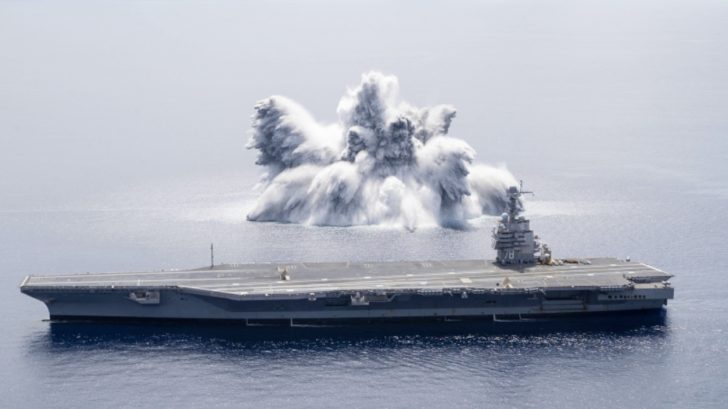 The United States Navy just released video footage of the detonation of a bomb so massive and powerful that it caused a full-blown earthquake in the state of Florida.

A 40K pound bomb was set off by US Navy as part of full ship shock trials (FSST).
It said the trial was conducted to test the safety of a new aircraft carrier, the USS Gerald R Ford – "to ensure the ship is hardened to withstand battle conditions"

The USS Gerald R. Ford was about 100 miles off the eastern coast of the United States when they detonated this 40,000-pound bomb directly adjacent to and beneath the ship itself.

“The leadership and crew demonstrated #NavyReadiness fighting through the shock, proving our warship can ‘take a hit’ and continue our mission on the cutting edge of #NavalAviation!” the crew wrote on the ship’s official Twitter account.

#Warship78 completes the 1st explosive event of Full Ship Shock Trials! The leadership and crew demonstrated #NavyReadiness fighting through the shock, proving our warship can "take a hit" and continue our mission on the cutting edge of #NavalAviation!@USNavy @NAVSEA pic.twitter.com/dAmh70n509

The ship was conducting what the Navy calls “Full Ship Shock Trials” and was executed to test the durability and strength of the vessel to assess its battle-ready state.

100 miles away, on the Florida Coast, the tremendous force of this bomb was so great that it triggered a 3.9 magnitude earthquake in Daytona Beach.

This trial took place on Friday, June 18th, 2021 and further trials are projected to be conducted at other points along the eastern seaboard of the US – all of which will take into account environmental protection, marine life, and migration patterns.

The Navy assured that the trials are conducted with strict safety protocols for those participating.

See the full video below.

Video shows an explosion in the Atlantic Ocean after the U.S. Navy detonates a 40,000-pound bomb in their first “Shock Trial” for the new aircraft carrier, the USS Gerald R Ford. The test is to "ensure the ship is hardened to withstand battle conditions." https://t.co/6dN37DqHTs pic.twitter.com/hmR2j6r3Sv