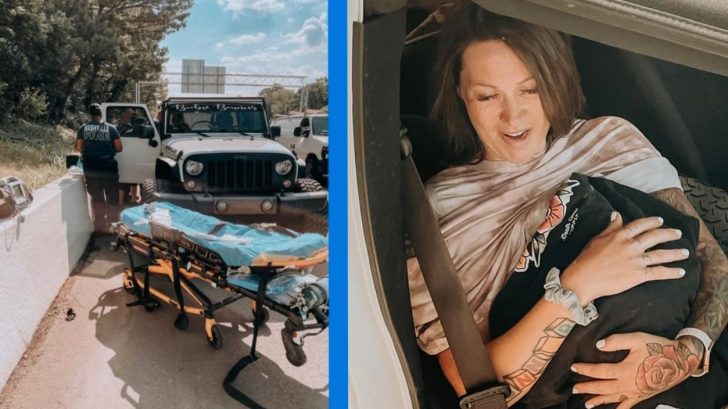 Gayla Thompson from Nashville, Tennessee shared photos on Facebook and a story about how she gave birth to her baby on the side of the interstate.

She wrote that she woke up feeling a lot of pain that morning so she told her husband Ryan Thompson that it was time to head to the hospital. On their way there, they dropped off their oldest son Connor and then continued their trip to the hospital.

All of a sudden, about halfway to the hospital the pain hit Gayla so strong that she couldn’t even scream anymore. She asked Ryan to speed with the caution lights on and get to the hospital but he was not willing to risk his baby or his wife’s life, so he pulled over to the side of the road and called 911.

While on the phone, the baby began to come on out so that they could see his head. However, he was looking like he couldn’t breathe. With another contraction, she pushed again and he finally came all the way out and they unwrapped the umbilical cord from around the baby’s neck so he could breathe.

“Carson was born at 8:56am on the side of interstate I-440!” Gayla happily wrote on Facebook. “My poor Jeep,” she jokingly added.

She said she pulled her shirt up so they could put the baby skin-to-skin to keep him warm and grabbed a shirt in the backseat to place over him. Paramedics arrived shortly to take them to the hospital where the baby was examined to be fully healthy. You can view her full Facebook post below.

WARNING: Photos Below Are Not Suitable For All Audiences

Video Interview Below With Mother & Father