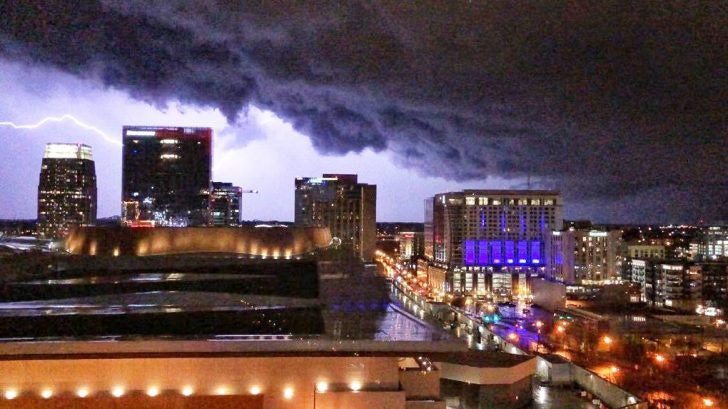 Overnight, residents of Tennessee were awoken by incredibly scary tornadoes with winds reaching 136-165 miles per hour.

Prayers go to the dozens victims of the deadly tornado in Nashville this morning. ?

The Weather Channel reported that “one or more tornados” touched down in middle Tennessee early Tuesday (March 3) morning.One of those tornadoes struck the Nashville metro area.

Unfortunately, news quickly spread that these tornadoes not only destroyed buildings, structures, and homes, but were also deadly. At 8:23 AM Eastern Time, Nashville Mayor John Cooper and Governor Bill Lee confirmed there were eight total deaths.

Sadly, The Tennessean is now reporting that the death toll has risen to 19.

Over 20,000 people are still without power, but earlier this morning that number was over 50,000. While the number of buildings collapsed stayed around 48, there are so many more that were damaged. Many of the collapsed structures were apartment complexes, leaving so many residents now homeless.

Hundreds of people in downtown Nashville are homeless this morning after a tornado slammed into our city. Many of these people are from apartment complexes that were destroyed pic.twitter.com/HGu4NBLsr9

If you’d like to help those who were affected by the tornado, there are a few different places you can donate.

Our thoughts and prayers are with everyone affected by this horrible tragedy.

See some of the aftermath below.

What a tragedy in #Nashville ?? pic.twitter.com/nOlgO8TkTy

@POTUS WILL BE VISITING NASHVILLE ON FRIDAY..! #NashvilleStrong #TennesseeStrong We will Rebuild! Pray for the Families and Victims.. 19 Lost so far pic.twitter.com/Pktk8u7l3f

UNBELIEVABLE: This is an aerial view of some of the damage in Nashville after Metro Police surveyed the area. pic.twitter.com/ykyGGyPI7Z

The tornado that just touched down in Nashville has absolutely devastated the local airport.