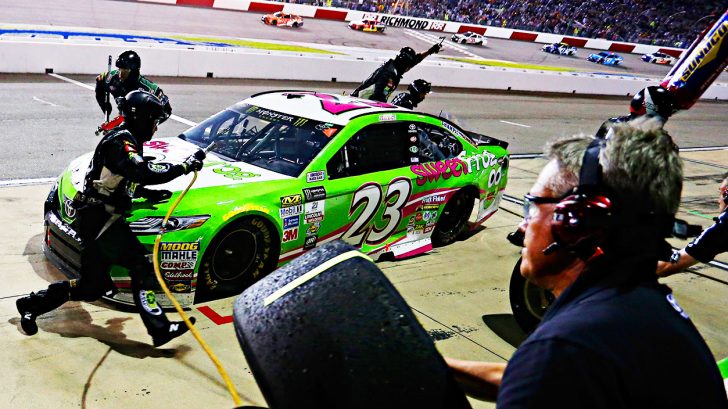 The engine team refused to start their Cup Series car meaning that they must start in the Daytona 500 qualifying race on Thursday, February 15th in order to compete in Sunday’s race.

BK Racing, who is fielding the No. 23 in NASCAR‘s Cup Series, filed for Chapter 11 bankruptcy protection less than an hour before a hearing was scheduled for Union Bank & Trust’s attempt to take control of BK Racing assets.

The team, which holds a charter in the Cup Series, is guaranteed a spot in every race due to the charter, but all of that could be taken away, should the governing body see fit.

Their driver, Gray Gaulding, is already slated to compete in the qualifying round after the team’s engine builder, Race Engines Plus, refused to start the car in the inspection last Sunday.

“BK will do everything it can to continue to race,” BK Racing owner Ron Devine said in a text, according to ESPN.

The bankruptcy filing states that BK Racing owes the engine builder $569,539, but the Race Engines Plus has sued the team owner for $647,084.

“I’m not really worried about all the other stuff,” Gaulding said of the circumstances. “My job is to go out there and drive, be focused and do the best I can for my team and BK Racing. I’m just excited about it. As a driver, things can be going on in the background or whatever. … You’ve got to stay positive no matter what the outcome is.”

NASCAR also issued a statement surrounding the filing, saying “We have a clear process around charter member governance. It is incumbent upon charter members to be ready to race and compete at the highest level. BK Racing remains the holder of the charter.”

As it stands, NASCAR holds the authority to revoke the charter from BK Racing because of the bankruptcy filing, but has not expressed interest in doing so.

Records show that the racing team was facing a federal tax lien of more than $667,000 and owes North Carolina more than $66,000 in fees. This is in addition to the private debts owed.

If the charter is revoked by NASCAR, BK Racing still has the option to compete as a non-chartered team, but would earn significantly less per-race.

What do you think of the filing? Will it have an impact on the entry for the Daytona 500?

Watch the video below of BK Racing’s hauler strategy.