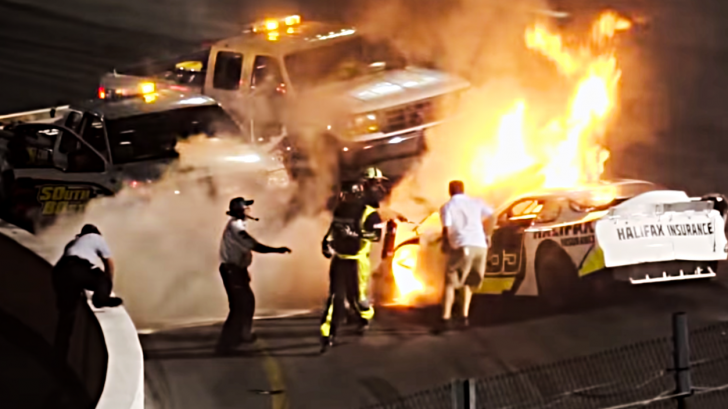 “I would have died there with him,” the hero father explained about rescuing his son from a fiery crash last weekend at South Boston Speedway.

The dad, Dean Jones, rushed onto the speedway track to save his son who was trapped inside a burning car after getting tangled up in a crash just moments before. He beat the rescue crews to the crash by a full seven seconds – but NASCAR is punishing him for it.

“I just had a single focus: getting my son out of that burning car – nothing else mattered,” Jones told NBC News.

Jones sucessfully pulled his son, Mike Jones, from the burning car during this Father’s Day Weekend race – but NASCAR officials have taken a strong stance on the issue and have punished Jones for his actions.

1st and foremost I want to thank the good Lord above for having his hand on mike tonight and keeping him from harm. Matt…

As the rules state, unauthorized personnel are not permitted on the track under any circumstance while a race is in progress – even if it’s under a caution flag due to a wreck, debris, or other hazards.

Because of this rule, NASCAR, and the speedway have issued disciplinary actions against Jones that will be in effect for the remainder of the season.

“We have sat down with Mr. Jones and discussed what transpired on Saturday, and he fully understands our position on non-safety personnel entering the track surface during an event,” South Boston Speedway said to ESPN. “We are all grateful that there weren’t any injuries, and we look forward to getting back to racing.”

Mike Jones, the driver, also explained to NBC News that the pair are worried about their future in racing because the car was totaled during the crash. This father-son duo are unsure if they’ll be able to race again because of the financial cost.

Together they have an online store of team merchandise that now includes a donation option to help them get back on their feet. To donate, visit the Mike Jones Racing Online Store.