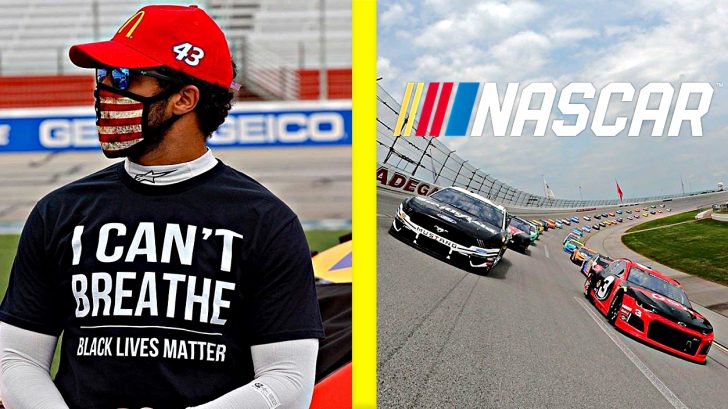 NASCAR has launched an investigation after a noose was found hanging in the garage stall of race car driver, Bubba Wallace, at the Talladega Superspeedway in Alabama, on Sunday, June 21.

The 26-year-old driver was recently a significant part of the successful movement to have the Confederate flag banned from NASCAR publicly asking for the removal of the flag stating that it had “no place” in the sport.

"My next step would be to get rid of all Confederate flags,” says NASCAR driver Bubba Wallace after throwing his support behind the nationwide protests against police brutality. “Get them out of here." https://t.co/Kf4CrMLLGh pic.twitter.com/wSSBhByguS

Although NASCAR announced that they had decided to move forward with the ban of the Confederate flag at its venues, they have not outlined plans on how they will enforce it. Disgruntled fans lined the boulevard of the raceway with their vehicles displaying Confederate flags prior to the race, and a plane flew over the track with a Confederate flag banner that read “Defund NASCAR.”

The ban is effective immediately and applies to all races, properties, and events.

Wallace released a statement about the despicable act as seen below.

As of Monday, June 22, authorities have announced that the FBI has taken over the investigation of who placed the noose in the garage stall of Bubba Wallace’s race car.

NASCAR’s statement was released early Monday morning stating that they were “angry and outraged and cannot state strongly enough how seriously we take this heinous act.”

Read their full statement below.

Governor Kay Ivey of Alabama released her own statement sharing that she was “shocked and appalled to hear of yesterday’s vile act against @BubbaWallace in Talladega – there is no place for this disgusting display of hatred in our state.”

Her full statement can be seen below.

I am shocked and appalled to hear of yesterday’s vile act against @BubbaWallace in Talladega – there is no place for this disgusting display of hatred in our state. Full statement: https://t.co/wmwVCOFd4B pic.twitter.com/mcFXKUynRs

Richard Petty Motorsports have announced that Richard Petty will be attending the race today in support of Bubba Wallace. Petty, who turns 83 July 2, has not attended any races since the coronavirus pandemic.

Petty released a statement Monday morning as seen below.

Due to pandemic restrictions, only 5,000 fans were allowed in the stands to watch the race. However, they were not granted access to the infield or the restricted area of the Cup Series garage. A very limited number of people have access to the garage where the cars are kept, due to the new strict health guidelines. That limited number would include crew members from each racing team, NASCAR employees, Talladega staff members, security guards, and safety crews.

Even drivers aren’t permitted to enter the garage, instead, they go directly from their motorhomes to their race cars to drive. Due to rain, the race was postponed on Sunday and the drivers were never called to their cars.

The GEICO 500 at the Talladega Superspeedway is set to resume this afternoon at 3 pm ET.

Watch a news report on the incident below.