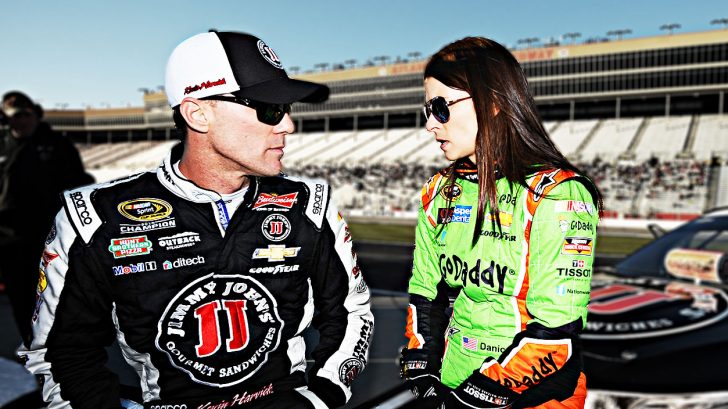 He’s got some pointed words for his former colleague and teammate, and he’s not pulling punches in this new video interview!

Danica Patrick, who has been known for her on and off the track personality, returned to the NASCAR track for one final race on February 18th, taking part in the Daytona 500 and reviving some old paint colors on her car for her retirement tour.

Just a month after announcing her retirement from NASCAR’s Cup Series, she also revealed that she and fellow driver, Ricky Stenhouse Jr. had split up after five years together. It wasn’t long before she was spotted with Green Bay Packers quarterback, Aaron Rodgers, and dating rumors began swirling. Then, she confirmed it to the media.

Now that her relationship status with Rodgers is on the table, it’s fair game for her competitors to talk about and interviewers caught up with former SHR teammate, Kevin Harvick, for his thoughts on how the new lover would impact her performance.

Let’s suffice it to say he didn’t mince words.

“It won’t make her drive any better,” Harvick zinged, adding “It might make her more popular.”

Having been drivers on the same team for some time, who knows what inspired him to take a jab at Patrick’s driving skills. Maybe he’s just not a Packers fan?

Watch the video below and let us know what you think.