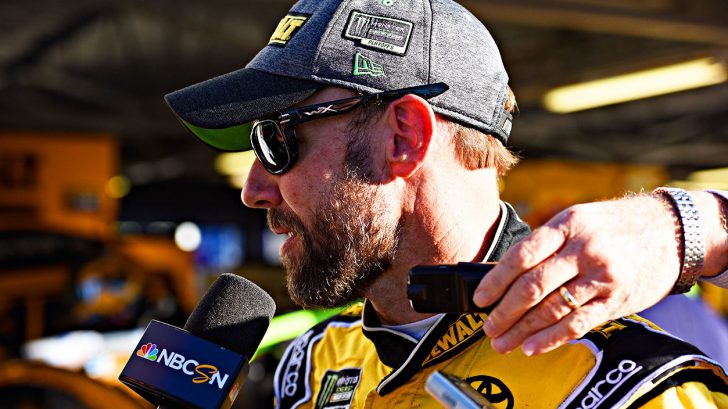 With sponsorship troubles plaguing his 2017 season, his team officially replaced him in July with another driver – leaving him without a ride for the current season. Many said this would be the end for Matt Kenseth – but they were all wrong.

Kenseth, who started out driving in the NASCAR Cup Series for Roush Racing, ran with them from 1998 through 2013. During that time, he won a Cup Series championship and took home two Daytona 500 wins. But, he took off to Joe Gibbs Racing after that. And this was a sore spot for team owner, Jack Roush.

Now, Kenseth is returning to his Cup Series team roots and has been picked up by Roush Fenway Racing for the 2018 season – starting with the May 12th race at Kansas Speedway.

What took so long for Roush to ask Kenseth back? Time.

”What took so long is there was a rawness from him leaving me,” Roush said according to Fox Sports.

Kenseth is scheduled to split time in the No. 6 Ford with Trevor Bayne and he’s already slotted for a position in the All-Star race, with the remainder of his track time still undecided.

”It feels like the right deal at the right time. It’s with Jack. It’s an interesting challenge for me and not just being a driver, I hope I can be much more to the organization and I’m hoping that there are a lot of different ways I can help,” Kenseth said. ”It’s fairly small right now, down to two teams and it’s leaner, and I feel like they’re on the right trajectory.”

Both Kenseth and Roush are excited about teaming up again and feel like they have another future championship under their belts.

”We see a potential for Matt being involved with the company and race team past his driving,” Roush said. ”We certainly feel like he’s come home to us. He’s a significant part of the history and legacy. It’s a chance to look at our cars and find out if there’s something glaring that Matt will see from his experience.”

One person who wasn’t as excited about the agreement, specifically the split-time in the car, is Trevor Bayne. “I want to be in the car every week.”

What do you think about Kenseth’s return to the Cup Series? Do you think he has what it takes to win?

Watch the video below of his victory at Phoenix in November.