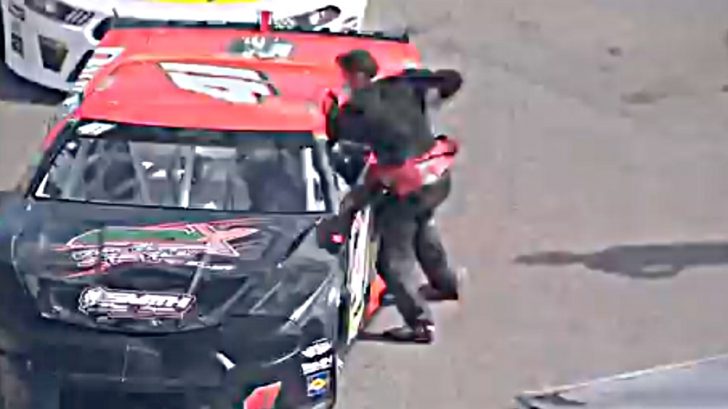 During the NASCAR race on Saturday (Sept 24) at Virginia’s Martinsville Speedway, tempers were boiling over and  Andrew Grady was caught on video attacking his rival opponent Davey Callihan after he says Davey wrecked him and Brandon Pierce.

Video footage captured the meltdown showing Grady punching Callihan over and over again while Callihan was sitting inside his car trying to defend himself.

Several NASCAR staff members rushed over to calm Grady down and were able to pull him away, but not before he kicked Callihan’s Number 41 car, and gave him a good cussing.

We’ve got tempers boiling over at @MartinsvilleSwy

Andrew Grady takes out his frustration on Davey Callihan after an accident in Heat 1@FloRacing pic.twitter.com/DeBkUQ27Xy

Grady said that he unleashed his frustration and barrage of attacks on his fellow competitor after the two competed with each other over a transfer spot.

Grady told reporters with Racing America who were on the scene filming him that Callihan had flipped him off and that’s what made him go into a rage and begin punching him.

Andrew Grady says Davey Callihan flipped him off when he went to talk so he decided to ‘Mike Tyson his head.’

He says there are dumbasses who have no business driving a Lawn Mower much less a Late Model at Martinsville.

Says that Callihan wrecked him and Brandon Pierce. pic.twitter.com/X1m99JRYOj

Weaver, who is an editor-in-chief with Racing America, said he spoke with Callihan as well after the feud, and Callihan claims that he did not flip off Grady.

He said, “No, I never flipped anybody off. He just comes, started punching me inside the race car. I understand he’s frustrated, but then again it was for the transfer spot and we were just fighting for our life.”

See Callihan Give His Thoughts In The Video Below

“It was for a transfer position at Martinsville. From my perspective, I was there. It was close.”

He says he didn't flip off Andrew Grady and would have had a conversation about it.

“We were fighting for our lives out there.”