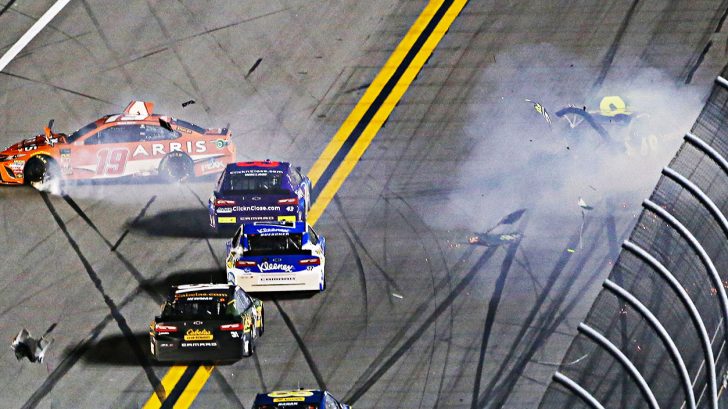 In the qualifying round for the 60th Annual Daytona 500, the current NASCAR champion saw his car get completely destroyed and took down two other vehicles in a crash that had everyone gasping.

Jimmie Johnson, a 7-time NASCAR Cup Series champion, is currently the only active driver with multiple Daytona 500 wins – but that didn’t do anything to help him avoid a wreck that torched his car and forced him to start at the rear-end of the pack during Sunday’s Daytona 500.

2018 marks Johnson’s 17th full-time season and has a chance to beat out both Dale Earnhardt Sr. and Richard Petty by taking home an eighth championship title, but that means he needs to fight his way to the front this weekend.

During the Can-Am Duel qualifying round on Thursday, February 15th, 2018, Johnson had some tire issues and got loose after falling out of the single-file line on Lap 8. He slammed straight into Aric Almirola and Daniel Suarez. Almirola is running the No. 10 Ford for Stewart-Haas racing as Danica Patrick’s replacement.

“Jimmie (Johnson) blew a right rear tire and just came across the race track,” Almirola explained to Fox Sports, according to MSN. “There was nothing I could do. I saw him pull out of line. I thought he was just checking up but he came back across the track. It is disappointing. Not the way I wanted to start speedweeks with our Smithfield Ford Fusion but we will get another car out and get ready for the rest of the weekend.”

Taking to Twitter after the incident, Johnson opened up about his three-car setup going into Daytona weekend and admitted that he’s already lost two of them – something he says he hates.

“Unfortunately, obviously lost our second car. Our backup is really good…but we don’t have another backup after that,” Johnson said in the video. “We need to make sure we don’t have any more issues going through these two practice sessions leading up to The 500. Bummer on that front – I hate it for my guys. So much work goes into building those things.”

Watch Jimmie Johnson open up about the crash and his plans for Daytona 500 in the Twitter video below and be sure to watch NASCAR’s full crash video below too!